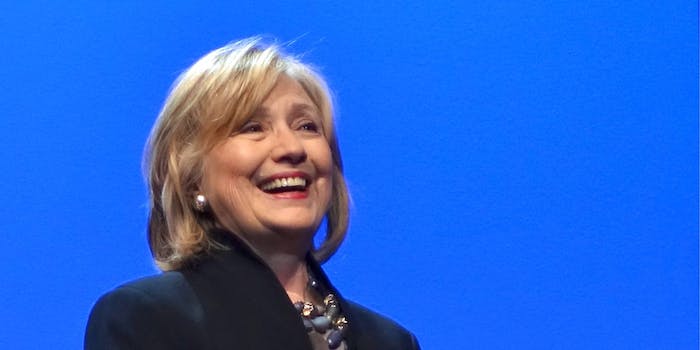 So far, the AP has declined.

The Associated Press has irked Hillary Clinton‘s campaign with a recent tweet about an investigative story on the Clinton Foundation, and though the campaign has asked the AP to either amend or delete the tweet, so far the news organization has declined to do so.

The original tweet addressed a number of meetings held by Clinton when she served as secretary of state. The tweet refers to a lengthy AP article.

“We have formally requested that AP remove or amend this tweet. They apparently considered it, but officially decided to let it stand,” Brian Fallon, press secretary for the Clinton campaign, told the Washington Post.

Wemple believes the AP’s tweet is “tendentious and misleading,” as it does not represent the complexity and intricacies described in the AP story, reaching readers only on a surface level and avoiding “key qualifiers.”

“Click through to the actual article and a key qualifier rears its head. The count doesn’t include anyone in the U.S. federal government or representatives of foreign governments. In other words, most of the people with whom Clinton met as secretary of state,” Wemple said.

Clinton said it was “absurd.” As the AP wrote, she said the AP had “‘only looked at a small portion of my time’ as secretary of state and had drawn the conclusion that her meetings with Nobel laureates—such as Peace Prize winner Elie Wiesel—were connected to the foundation rather than their work as global leaders.”

With almost 7,000 retweets and 5,000 likes on Twitter, the news has gained traction. Some are accusing the AP of “grasping for straws” or spreading unnecessary animosity with its reporting.

why are you so full of hate?

Others online believe nothing misleading lies within the tweet, finding that the AP’s reporting is accurate and honest and that the investigation remains justified.

Nonetheless, in a time where Clinton and her campaign are under heavy scrutiny, this tweet could create even more questions and doubts.