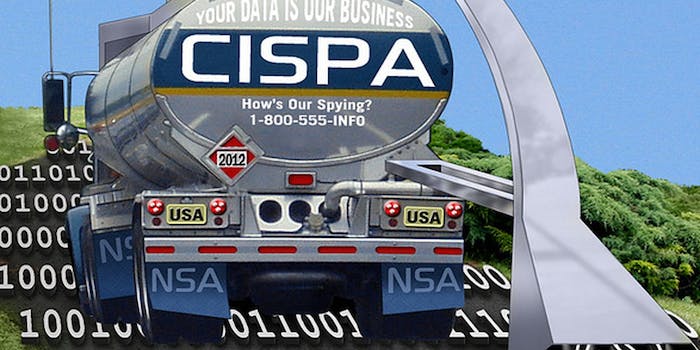 Meet the players lining up on either side of the most controversial Internet bill of 2013.

At long last, Congress is about to vote on the controversial Cyber Intelligence Sharing and Protection Act (CISPA).

CISPA’s stated intention is to make it easier for the government to help online companies that get hacked. But the devil’s in the details. The bill would allow those companies, in an emergency, to share what they know with federal agencies like the FBI, CIA, and NSA with little consequence. But opponents call the bill a gross violation of your online privacy.

You might be wondering: why would anyone want this bill? Alternately, if you’re its sponsor, Mike Rogers (R-Mich.), you might be wondering why anyone who’s not a 14-year-old tweeting from a basement would oppose it. As the vote looms—it should come Thursday morning, Rogers said Wednesday—we present a roundup of six major CISPA players, and where they’re coming from.

Rogers, one of CISPA’s two sponsors in Congress, is the Chair of the House Intelligence Committee. He’s also a former FBI agent. In other words, he has a tight relationship with the U.S. government’s intelligence-gathering agencies, and he readily agrees with their aim of keeping tabs on those who would hack U.S. networks. He has been convinced for years—since 2011, and possibly earlier—that Chinese hacks on U.S. companies are among the gravest threats to national security. To fight them, he’s argued again and again, federal agencies need much greater knowledge of what’s going on in those networks—and that CISPA is the way to achieve that.

CISPA’s other sponsor, Dutch Ruppersberger (D-Md.) likes to brag that the ACLU was consulted on a very early draft of CISPA. But, as the ACLU has countered, they objected to most of the bill, and those objections went unheeded. Even after CISPA has been updated and amended a few times since it was first introduced into the House in 2012, the ACLU has been among its most vocal critics.

In its criticism of the bill after its most recent amendments, the ACLU argued that the bill’s fundamental problems still hadn’t been touched. “The core problem is that CISPA allows too much sensitive information to be shared with too many people in the first place, including the National Security Agency,” wrote ACLU lawyer Michelle Richardson.

On Tuesday, as part of an instantly-infamous speech, Rogers noted that “those in the business of prosperity on the Internet” support CISPA. There’s no denying that there’s plenty of incentive for major tech companies—which spend money on their own Web security—to want CISPA. They can choose what they want to share with the government if they’re being hacked, and the government, in turn, can try to help.

Nobody’s responded to that notion quite as enthusiastically as IBM, who reportedly sent a stunning number—almost 200—of executives to Washington, D.C. to lobby members of Congress on behalf of the bill.

“It’s our experience that the most effective thing you can do when a cyberattack occurs is to share information quickly between government and industry and between industry actors in real time in order to find where the attack is coming from and to shut it down,” Chris Padilla, IBM’s vice president of governmental affairs, explained to The Hill.

Ohanian is the Web entrepreneur who cofounded Reddit, helped launch sites like Breadpig and Hipmunk, and might soon own some of the Brooklyn Nets. He disagrees with the notion that CISPA’s a good idea just because it could lessen companies’ security burdens.

“I’m in ‘the business of prosperity on the internet’ and I opposed [Rogers’s] bill,” Ohanian told the Daily Dot. “As written, it’s a bad bill for me as a citizen. That’s my first priority.”

“Furthermore, like I said in that video, it totally ignores the privacy policies we create that our users agree to—I don’t see how any entrepreneur would be OK seeing their contracts with users’ privacy trumped.”

Alexander juggles two enormous roles. Not only does he head the intelligence-gathering NSA—jokingly referred to as standing for “No Secrets Allowed”—he also heads the U.S. Cyber Command, a joint military venture dedicated to online security.

Though he doesn’t directly bargain with the public for CISPA support, Alexander has long petitioned influencers in D.C. to adopt a bill that would allow easy information sharing between private companies and federal agencies. Privacy concerns are misplaced, he’s said—agencies like his would only look for very specific threats.

The man with the most power of all, Barack Obama, has the power to veto any bill that comes into his office. And on Tuesday, as they did in 2012, his advisors explicitly promised to veto CISPA if it crossed his desk.

Was that veto promise influenced by the 100,000 Americans who signed a White House petition against the bill? Or by the similar petition that ended up one of the ACLU’s most successful of all time? Or are Obama’s advisors simply writing what they believe is right when they say that CISPA “Citizens have a right to know that corporations will be held accountable – and not granted immunity – for failing to safeguard personal information adequately”?

We don’t know, of course. But we do know that a veto promise is a major victory for those who say CISPA would violate their privacy.