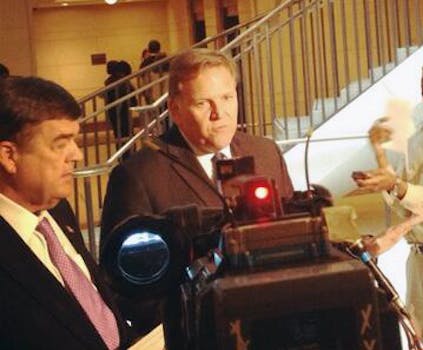 On Tuesday, Rogers described the bill's typical opponent as "a 14 year old tweeter in the basement."

This has been a very bad day for Rep. Mike Rogers (R-Mich.). Today, he’s the most hated politician on the Internet.

He’s long irked many by sponsoring the unpopular Cyber Intelligence Sharing and Protection Act (CISPA). But on Tuesday, Rogers described the bill’s typical opponent as “a 14-year-old tweeter in the basement.”

Rogers has tirelessly advocated for CISPA, which passed the House once before but never moved to the Senate, since at least 2011. It’s unclear if, when he made the statement, he was aware that the White House had already delivered the legislative smackdown and promised to veto his bill.

Millions of Internet users worldwide have signed petitions against CISPA, citing concerns that it would enable the government to access their otherwise personal information online. Many opponents are believed to be fifteen, or even older.

Twitter’s reaction to Roger’s comments, buoyed by the news of the veto promise, was swift and angry. Thousands, by one count, indignantly tweeted to him at @RepMikeRogers. Their ages ranged from teenagers to grandparents. They included software engineers and medical students, professors and carpenters.

“I’m 42 and definitely don’t live in a basement. And I absolutely oppose CISPA,” wrote @shayera, a Los Angeles librarian.

“I’m a Republican, 28, and I oppose #cispa Not that you care, but will do everything in my power to prevent your reelection,” posted ‏@bossy909.

One 52-year-old CISPA opponent tweeted he didn’t even have a basement.

Remarkably, this is not even Rogers’s only recent CISPA-related Twitter snafu. In March, website hosting company Namecheap ran a campaign to donate to the Electronic Frontier Foundation, which runs an anti-CISPA app, each time the hashtag #CISPAalert appeared on Twitter. Rogers (or whoever runs his account), apparently saw the popularity of the hashtag without realizing its use, and tweeted it six times before stopping.

“#CISPA is a terrible violation of individual rights,” he tweeted. “Hopefully next election you’ll be in your basement.”