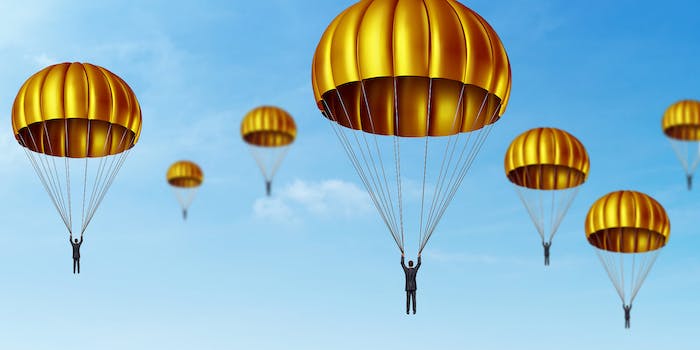 A conspiracy about mass CEO resignations is ignoring the obvious

Something is afoot... but not what conspiracy theorists think.

Are high-level CEO’s really resigning in droves under the cover of the coronavirus pandemic?

According to a popular meme going around social media, they are.

In fact, 19 leaders of gigantic companies have all left their posts since COVID-19 took over the headlines. And we’re all too distracted by the torrent of pandemic headlines to realize what’s really going on here: Deep state-aligned industry titans are running for the hills before they’re brought down by President Donald Trump and his team of patriots.

Every major social media platform has seen an explosion in viral popularity of a meme that declares that “while you’ve been distracted by the COVID-19 news,” a number of top-level company CEOs have all resigned.

Big names like the heads of Disney, Microsoft, Ebay, MGM, and many others. Nineteen in all.

The meme has a number of variations in terms of who it lists and when they left, but all of the versions have thousands of shares on Twitter (one version of it had over 4,000 retweets before it was pulled down), a huge presence on Facebook and Instagram; and the idea is even starting to make its way into mainstream discourse. The implication is clear: big company heads are taking advantage of the all-consuming coronavirus coverage to quietly quit.

But the idea didn’t begin with coronavirus.

In fact, the concept of CEOs resigning in droves to avoid justice is one of the core components of the QAnon conspiracy theory. QAnon posits that a secret war between good (Trump and his inner circle) and evil (almost everyone else) is being played out on social media and through hidden military actions—with the end result being a massive purge of evildoers in politics, business, and entertainment.

Part of that purge is a mass resignation of CEOs, as first outlined in a Q drop from Dec. 2017 that commands followers to “Track CEO resignations.”

And unlike many concepts in QAnon that come and go based on political events (or the whims of whoever posts as Q), the idea of powerful businesspeople leaving their jobs because of Trump’s secret war has stuck.

Q has referenced it many other times, even as recently as last December, when the poster rhetorically asked “Still tracking resignations?” And Q believers are, with a section of the Q research clearinghouse site QMap.pub devoted to the departures of high-level execs and government officials.

Coronavirus has also quickly become a huge part of QAnon’s mythology, so it’s not surprising that Q promoters with large followings have made CEO resignations a sign of something sinister within the pandemic. Like many other concepts in conspiracy theory, the “CEO resignations” meme is partly real, but also includes a number of things that either haven’t happened at all or aren’t relevant.

In this case, it’s seamless merging of fact and fantasy. All of the 19 CEOs in the meme have, in fact, stepped down from their posts. That’s not fake. But their departures had nothing to do with coronavirus, and many took place long before the first COVID-19 cluster was identified.

According to a deep dive by TruthOrFiction.com, six of these executive departures were announced in 2019 (including one in 2018), with many of the others either not being the actual CEOs of their company, or leaving to take new positions. Some of the other resignations or retirements won’t become effective until well into 2020 or 2021. This isn’t unusual with major companies, where a CEO’s departure is a major upheaval that demands long-range succession planning. Announcing you’re leaving a company in a year is not a panicked decision made in the face of a military tribunal—it’s just the opposite.

In fact, of the 19 “resignations,” only one on the list, the departure of MGM Resorts CEO Jim Murren (who was not the overall CEO of MGM), could reasonably be linked to the pandemic.

But it has nothing to do with mass arrests or a secret purge of corruption. In this case, Murren left due to a large-scale downturn in the profits of MGM’s worldwide properties. Most of the other departures just happened to take place around the time that a worldwide pandemic was kicking off. But as any beginning logic student knows, correlation does not equal causation. That the CEOs left before and during a pandemic does not mean they left because of the pandemic.

To use the biggest names on the list who “announced their departure” as the pandemic was going, “CEO of Microsoft” Bill Gates hadn’t actually been the CEO of Microsoft since 2000, and merely left the company’s board of directors in 2020. IBM CEO Ginni Rometty announced merely that she’d be leaving the company in December, when her contract was up. And Hulu CEO Randy Freer left his position in January as part of the company’s restructuring after it was acquired by Disney. None of these departures are especially surprising. In fact, CEO resignations have been up in the last few years.

2018 and 2019 were especially tumultuous for the heads of major corporations, with over thousands leaving their positions. CEO turnover in 2018 was 17%, and well over 1,300 left or were forced out of their jobs in 2019.

Of course, these were the years where QAnon gained worldwide recognition by, in particular, tracking CEO resignations. Was it because Trump and the Q team were rooting out the pedophiles and forcing them to run for the hills, lest they face military tribunal and execution?

Not quite. Their departures had any number of reasons, with sexual harassment accusations bringing down several high-profile CEOs. Others left for more typical reasons such as retirement or getting kicked upstairs by a board due to a shift in priorities or a temporary downturn in profits. Others simply left due to burnout or a generational shift. And a few were brought down by legal scandals of the financial variety.

Finally, many saw a recession coming their way, and decided to get out while the stock market was high and Trump’s tax cuts were making life good for the super-wealthy.

Top-level CEOs had already cashed out massively from stock sales after the tax cuts kicked in. So with a recession probably ushering in a stock market dip, it’s far more likely that the “conspiracy” at work here is CEOs predicting a Trump loss in November, and with it, an increase in capital gains taxes— an increase Joe Biden has already advocated for.

With a growing populist anger against the wealthy, why not get out before it comes?

Before that, CEO resignations were pretty steady, with a sizable number departing every year. Top-level CEO positions already have a high turnover, and the last decade has seen the average tenure for a C-suite executive at about five years.

That’s not to say that the pandemic hasn’t claimed CEOs. It has. According to Business Insider, the CEO of the tobacco company Altria, Howard Willard, resigned due to complications from contracting the illness; while the head of SeaWorld recently resigned due to the financial hit the park was taking from having to close down; and there are rumors that Disney head Bob Iger unexpectedly stepped down over a year before his planned retirement because he knew how bad the pandemic would be.

And there’s another conspiracy that Q believers have ignored entirely—one that’s already been proven to have come true. It’s the insider trading that a number of Republican senators engaged in, dumping corporate stocks after getting briefed on the likely crushing impact that coronavirus would have on the world’s economy. It’s the kind of top-level corruption that believers in “the storm” would normally make into a thousand memes. But since it was Republicans caught doing it, and Q is nothing if not slavishly faithful to the GOP, they haven’t said a word about it.

So yes, while more CEOs have resigned in the last few years than since the Great Recession, most were in the works long before the coronavirus pandemic hit. They had nothing to do with the actual pandemic—and not the behind-the-scenes war between good and evil that Q believers talk about.

The real conspiracies—be it insider trading or that “man of the people” Donald Trump made a great number of rich people more wealthy who are now they are cashing out before things collapse—apparently just isn’t as fun.