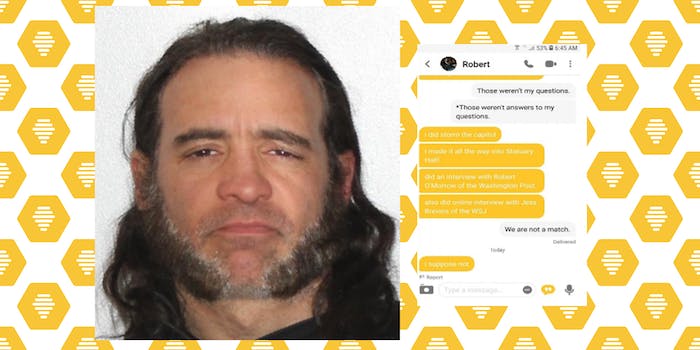 ‘We are not a match’: Internet loves Bumble match who turned Capitol rioter over to feds

He was allegedly caught in a 'Bumble honeytrap.'

Federal authorities say that after he bragged about participating in the Capitol riots, Robert Chapman’s prospective Bumble match rejected him with this message: “We are not a match.” Then, they say, his match turned him in.

Soon after the Capitol riots, reports emerged that women were using the dating app as a dragnet to find and report insurrectionists in a phenomenon dubbed the “Bumble honeytrap.” Chapman is among those allegedly ensnared.

A week after the Capitol riots, authorities say Chapman told his potential paramour, whose name and gender are not revealed in charging documents, that he’d been inside the Capitol during the deadly attempt to overturn the election results in former President Donald Trump’s favor.

“I did storm the Capitol,” he said, according to screenshots from their conversation in the court filing. “I made it all the way into Statuary Hall!”

He added that he’d been interviewed by two news outlets. Then Chapman’s Bumble match politely and straightforwardly rejected him, feds say.

“We are not a match,” they messaged.

Chapman seems to have taken it well. “I suppose not,” he purportedly replied.

His match screenshotted the conversation and sent it to the police, authorities report.

The tip led to an investigation. The Federal Bureau of Investigation (FBI) says it turned up surveillance footage of Chapman inside Statuary Hall, social media posts he made about attending the riots, and selfies he posted from inside the Capitol. The FBI says he made one of these selfies his Facebook profile picture.

On Thursday, Chapman was arrested and charged with trespassing and disrupting government operations.

People on social media praised his prospective date for turning him in.

“Likes: NASCAR, long walks on the beach, and turning in traitors to the democratic process,” joked Quentin Hardy.

Chapman is one of hundreds who have been arrested for participating in the deadly riots. He’s since been released on his own recognizance, WNBC reports.

It is not known whether he ultimately found love on Bumble.