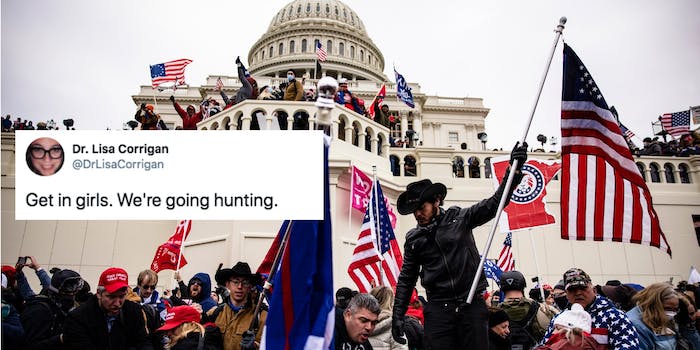 Women on Bumble say they are matching with Capitol rioters, turning them into the FBI

Women in Washington D.C. are taking matters into their own hands to obtain information on Capitol rioters.

After noticing an uptick in MAGA supporters on dating apps, women started wondering if the profiles could be useful to police.

“There are DOZENS of men on DC dating apps right now who were clearly here for the insurrection attempt,” Alia Awadallah tweeted. “Is that info useful at all for law enforcement?”

Awadallah’s tweet has been liked over 2,500 times, and other women also said they had reported profiles that clearly participated in the riots.

One woman responded to Awadallah and said she knew a “friend of a friend” who changed her political affiliation on Bumble to deliberately try and find conservatives who took part in the Capitol riot.

“She’s matching with MAGA bros and they’re bragging and sending her pics and videos of them in the Capitol. She’s sending them to the FBI,” Allison Norris said.

Awadallah updated her followers and said she was on hold with the FBI and police.

“Everyone get on the apps and start screenshooting,” she told followers.

Many others loved the idea and wanted to help find rioters as well.

“Get in girls. We’re going hunting,” one Twitter user said.

Not many people posted about how successful they were at trapping MAGA supporters, but plenty still supported the idea.

After multiple tweets about the “Bumble honeytrap” went viral, Bumble removed the politics filter in the United States to “prevent misuse.”

Many users were disappointed by the removal of the politics filter. Some worried that it was removed to protect the MAGA rioters.

However, Bumble had previously started banning users who “encouraged any illegal activity.” This includes users who were confirmed as rioters at the Capitol. Bumble did not elaborate on why it removed the filter but said it would be “reinstated in the future.”

“Please rest assured that we prohibit any content that promotes terrorism or racial hatred, and we’ve already removed any users that have been confirmed as participants in the attach of the US Capitol,” Bumble’s support account tweeted.

The FBI has been looking for leads about the rioters who overtook the Capitol last week. The bureau even posted on its Twitter page encouraging anyone with information to leave a tip.

A spokesperson for the Washington branch of the FBI told the Independent it received more than 100,000 “digital media tips” but could not comment on the nature of those tips.

The Daily Dot has reached out to Alia Awadallah.