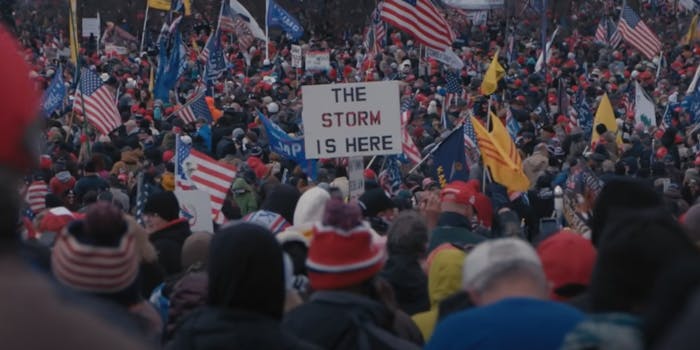 Trump supporters have desperately attempted to blame their insurrection on far-left activists.

The director of the FBI announced on Tuesday that the agency has no evidence to indicate that fake supporters of former President Donald Trump were involved in the Capitol riot on Jan. 6.

Responding to right-wing conspiracy theories that have blamed far-left activists associated with “antifa” for the insurrection, FBI Director Chris Wray told lawmakers that he has “not seen evidence of that.”

False claims began spreading almost immediately after the insurrection began, with countless prominent conservatives alleging that the violence was actually the work of far-left infiltrators.

Wray was testifying before the Senate, where some Republican lawmakers have even pushed the theory.

“We have not to date seen any evidence of anarchist violence or people subscribing to antifa,” Wray said.

The now-infamous “Q Shaman,” a QAnon supporter known for wearing horns and fur clothing, was even accused of being a far-left agitator prior to his arrest.

Despite the outlandish claims, not a single individual arrested or charged by the FBI thus far has had any ties to antifa.

And while Trump supporters have tried to point the finger at John Sullivan, a 26-year-old self-described racial justice activist who was charged after attending the riot, left-wing groups had denounced the man as nothing more than an attention-seeking opportunist that attended both left-wing and right-wing protests long before the Capitol attack.

A significant number of those seen leading the actual attack have instead been identified as members of far-right groups such as the Proud Boys.