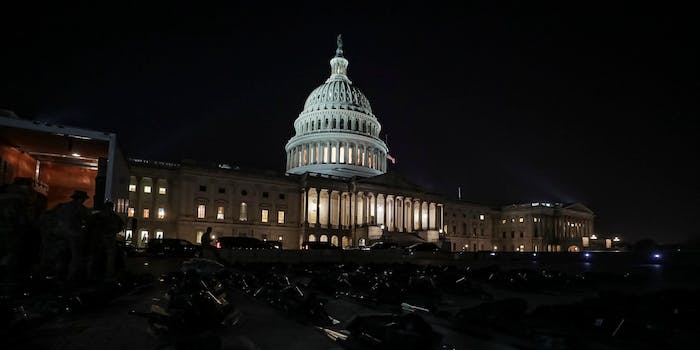 Far-right Oath Keepers got over $500,000 in donations on GiveSendGo after Capitol riot

On GiveSendGo, accused insurrectionists are presented as Good Samaritans.

Since Jan. 6, hundreds of people have been charged with crimes associated with their alleged participation in the Capitol riots. The insurrection resulted in several deaths, millions of dollars of damage, and saw people hunting lawmakers intent on murdering them, possibly by hanging from scaffolding they’d erected outside.

To pay for their defense, many accused insurrectionists are turning to what’s fast become the crowdfunding platform of choice for the far-right: GiveSendGo. They’ve raised hundreds of thousands of dollars—and counting. Cumulatively, campaigns for members of the Oath Keepers, an extremist militia whose members fantasize about civil war, have raised a half-million dollars.

GiveSendGo calls itself the “#1 free Christian crowdfunding site,” created so “crowds of Christians could come together and support other Christians in their endeavors.”

When other platforms turn away people accused of violently attempting to overthrow the government, GiveSendGo welcomes them. There, accused insurrectionists present themselves as Good Samaritans who are more apt to help old ladies across the street than to text an alleged co-conspirator that they want to put a bullet in 81-year-old Rep. Nancy Pelosi’s (D-Calif.) head.

Joshua James, whom authorities allege is a leader of the Oath Keepers, has raised $180,000 for his defense.

Federal authorities accuse James of spending weeks plotting with other members of the extremist militia, and planning to bring and stow weapons at the Capitol. He’s facing 20 years in prison for charges including conspiracy and obstructing an official proceeding.

On GiveSendGo, his family says he’s actually the victim, that the prosecution is unjust, and that James is an altruistic and “upstanding member of the community.”

Roberto Minuta was allegedly by James’ side racing golf carts towards the Capitol that day. The Oath Keeper is accused of breaching the building carrying weapons and wearing riot gear. He’s facing two decades in prison.

Minuta’s GiveSendGo denies he did anything wrong. He’s described as “a loving husband, father and patriot with strong Christian values,” and “a very patient, helpful, and kind person who was always very passionate about helping others, participating in local events, volunteering, and giving back to the community.”

Oath Keeper Kenneth Harrelson is another of the most successful alleged insurrectionists raising money on GiveSendGo. Donors have also contributed over $180,000 for his legal defense, which seeks a half-million dollars.

During the riots, Harrelson allegedly hunted Rep. Pelosi. He’s also accused of coordinating ground operations for the militia that day, according to authorities.

On GiveSendGo, he’s portrayed as more of a saint than a person who sought to violently overthrow the government and execute a lawmaker. The fundraiser describes him as “the kind man that will give you the shirt off his back no matter who or what color you are.”

“He didn’t’ do any of those things they say,” the fundraiser claims. “He is a protector and saves lives not give harm to others.”

Federal authorities say Harrelson and fellow Oath Keepers Connie and Kelly Meggs stored weapons at a hotel the day of the riot. The Meggs have been similarly successful raising money for their defense on GiveSendGo.

To date, the Meggs have collected $140,000. The pair, whom authorities claim participated in training and planning sessions with other Oath Keepers for weeks before the riots, are described as good Christians and “good people who love their country … and did nothing wrong.”

These are just some of the many alleged insurrectionists raising big bucks on GiveSendGo to defend themselves for a wide variety of crimes associated with their attempt to subvert democracy.

Because what’s more Christian than whipping your militia brethen into a riotous frenzy at the seat of democracy?