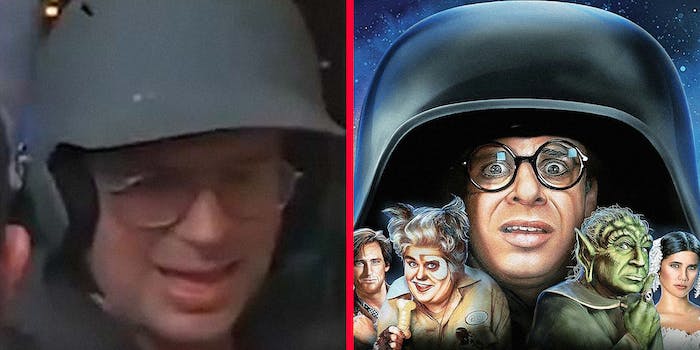 'Oh my God, Rick Moranis participated in the insurrection?'

Rick Moranis has been all over the internet for all the wrong reasons these last few months. In October, the 67-year-old Honey, I Shrunk the Kids actor was sucker-punched on the streets of New York City.

This weekend, Moranis again popped up on timelines everywhere after the FBI tweeted a request for help identifying an alleged participant in the Capitol riots. The man the FBI is looking for bears more than a passing resemblance to Moranis, whose better-known roles include Dark Helmet in Mel Brooks’ classic Star Wars spoof, Spaceballs.

In fact, the man could easily have been cosplaying as Dark Helmet.

People wasted no time pointing out the uncanny resemblance between the man who’s wanted by the FBI and the man who had roles in some of the most beloved films of the 80s and 90s, such as Ghostbusters and Little Shop of Horrors.

“Isn’t that the dad from Honey, I Shrunk the Kids?” joked @Winegeek84.

“Put out an APB for Rick Moranis wearing a baseball helmet,” tweeted @SteveKrasnow.

Numerous people jumped on the trending subject to defend the beloved actor.

To be clear: Rick Moranis is not wanted by the FBI, nor does anyone seriously believe the Canadian actor had anything to do with the Capitol riot. The wanted man, whom the FBI has labeled “Photograph #268,” also appears to be significantly younger than Moranis.