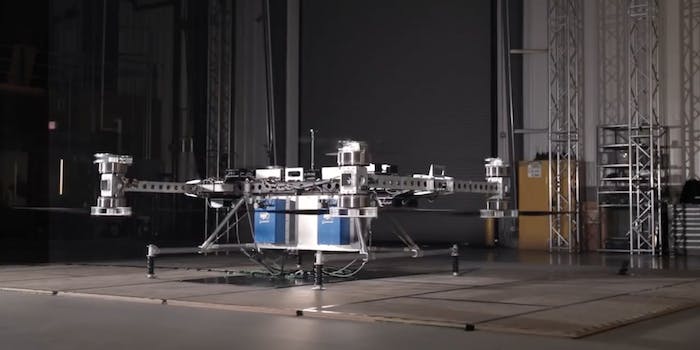 Boeing’s newest drone is a beast.

The prototype behemoth, which measures 15 feet long and 18 feet wide, can carry up to 500 pounds of cargo. Even its name is ginormous—Boeing calls it an “unmanned electric vertical-takeoff-and-landing cargo air vehicle prototype.”

“We have an opportunity to really change air travel and transport, and we’ll look back on this day as a major step in that journey,” Boeing’s chief technology officer Greg Hyslop said in a statement.

Boeing spent just three months designing and building the prototype megadrone, according to the Verge. The 747-pound creation is powered by an electric propulsion system and eight rotors, so it’s capable of vertical flight. It’s undergone several successful test flights at Boeing’s Missouri laboratories, but it’s unclear how long those flights were or how far the drone traveled.

Once fully vetted and available for use in the wild, the megadrone could certainly prove useful. In disaster areas, like we saw in the aftermath of Hurricane Harvey, it could be used to efficiently airlift clean water, food, and other supplies to victims who are stranded. It might also be used to transport supplies for the military or for corporations doing fieldwork with heavy equipment or hefty return loads.

As we’ve seen in Iceland, perhaps this drone’s most important future application is in beer delivery. OK—probably not, but can you imagine this gargantuan drone delivering 500 pounds worth of beer? It’s highly unlikely that Boeing designed this drone for keg transportation, but for the curious mind, it could carry three standard U.S. half barrels. That’s really not shabby at all.