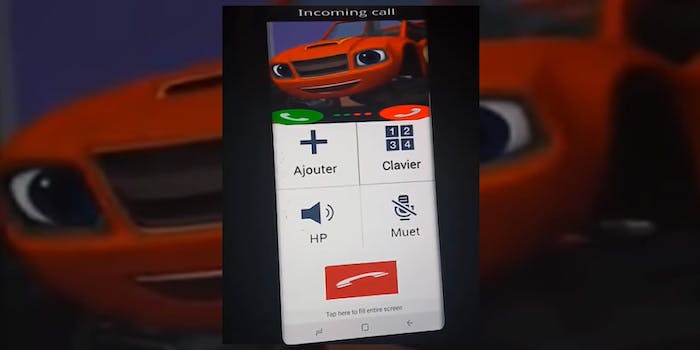 The free app was taken down by Google.

Google has removed a kid’s app from the Play Store that threatened to stab children.

The app surfaced in a video uploaded by a concerned mother who said she started to hear “demonic” voices coming from her child’s phone. The voice made sinister threats toward her daughter before she could close out of it.

The footage, which has been re-uploaded to YouTube and Reddit, shows the mom open the app, close out of a series of ads, and let the pre-recorded message play.

“Hi kids. I’m your new friend: Happy Slappy, whatever you want me to be called,” a devilish voice declares in an Irish accent. “You see, I want to play with you kiddo. Maybe we could perform some fun games together…What’s this hogwash?! You look a little afraid. Is it this knife in my whirly twirly hands? Making you a little nervous, huh? That’s alright because this knife is going to improve your look when it’s sticking right out of you.”

The video has received more than half a million YouTube views. Several parents appear to have replicated the video and posted them on their social media accounts to warn others.

Based on an animated TV series of the same name, the “Blaze and the Monster Machines” app was free to download on any Android device from the Google Play Store. The character’s name in the app, Happy Slappy, seems to derive from the practice “happy slapping,” where a group of people assaults a stranger while filming the incident.

One redditor says the app is a reskinned version of “Call from Slapy dummy doll,” a prank call app that is currently live in the Play Store. Another says the voice comes from the survival horror video game Bendy and the Ink Machine.

A Google spokesperson confirmed in a statement to the Manchester Evening News that it removed the app from its store.

“We have a set of policies designed to provide a great experience for users and developers and we act quickly to remove apps from Google Play that violate those policies.”

Android apps are first approved by Google before they get added to the Play Store, but that filtering process has proven to be unreliable. Last year, cybersecurity experts found several malicious apps hiding in the app store, waiting to infect an unknowing user’s device.

We strongly recommend reading app reviews before downloading them and installing Google’s Family Links app, which makes Android devices safer for children to use.

We have reached out to Google and will update this article if we learn more.