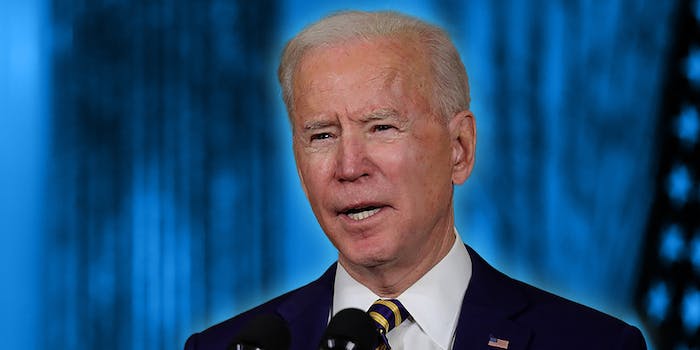 Biden has a 'critical opportunity' pick someone who is a public advocate.

After Joe Biden was elected president, the fate of the Senate was still up in the air, which meant it was a very open question as to how exactly the incoming president would be able to fill out the Federal Communications Commission (FCC).

Republicans seemed to be banking on winning the Georgia Senate runoff elections and by doing so, controlling the upper chamber and Biden’s nomination process. Before the end of the last Congress, Republicans even pushed through the nomination of Nathan Simington, a Trump pick, to try and deadlock the FCC in a 2-2 partisan tie, with the goal of controlling how long the agency would be at a standstill.

But that gambit failed when Democrats won both of the Georgia elections, giving the party control of the Senate—and the fate of the FCC.

Without the fear of Republican obstruction, tech and public interest advocates have begun pushing for Biden to act quickly to fill out the FCC. They say the president has come at a “critical opportunity” to pick a “bold” choice.

With control of the FCC, the Democrats on the agency can begin to get to work on a number of high-profile agenda items, with many advocates putting the restoration of net neutrality rules near the top of the list.

“I think this is a moment that calls for someone who is really willing to fix the mess that Ajit Pai has left,” Craig Aaron, the co-CEO of Free Press Action told the Daily Dot. “There’s a lot to clean up. But this is really a moment—and I think you’re seeing this across the Biden administration—where there seems to be growing recognition of ‘we really got to the precipice as a country.’ We need someone willing to step into that job, really lead, be bold, and solve problems.”

Over the next few years, the FCC will be at the center of a number of issues that have weaved their way through Washington D.C. recently.

Besides net neutrality, the coronavirus has highlighted the starkness of the country’s digital divide and lack of affordable broadband options. There are questions about media ownership, and even the regulation of social media (even though numerous experts have pointed out that the Section 230 debate has no place at the agency, despite Trump’s efforts before he left).

Since the agency will have a role in a number of critical topics, advocates groups have already begun to ratchet up pressure on Biden to nominate someone to fill out the five-person agency.

While Biden named Jessica Rosenworcel as the acting chair of the agency, she already part of the FCC, meaning a fifth spot is still open. That final spot would give Democrats a majority, and is critical for 3-2 votes that will go down party lines.

A coalition of more than 30 advocacy groups signed a letter to Biden and congressional leadership last month urging them to speed up the nomination process. The groups wrote that leaving the fifth spot open would leave it “impotent to pursue the bold action required at this time.”

Biden can go one of two ways to fill out the FCC. He could elevate Rosenworcel to become the permeant chair of the agency, or he could nominate someone who would come in with the expectation that they would become the chair. Any pick by Biden would have to go through a Senate confirmation process, but with Democratic control, it is likely they would be confirmed.

While a Democratic majority does make a potential nominee’s confirmation easier, it wouldn’t be without any obstacles. Republicans (and some Democrats) have not made Biden’s appointments easy—look at what’s happened with Neera Tanden. So Biden will need to pick someone he is confident can make it through the process. Which puts a huge damper on progressives’ wishes.

But amid all of this, various groups and even lawmakers are making their desired picks known. Just this week, more than 30 Democratic congresswomen wrote a letter to the Biden administration urging the president to elevate Rosenworcel from the acting position to the permanent chair.

Because of the uncertainty of how Biden will ultimately go, there has been a lot of speculation as to who the nominee could be either for the chair or the fifth nominee.

Clyburn pushed back against the FCC’s net neutrality repeal as a commissioner in 2017 and briefly served as the acting chair of the FCC. Sohn has long been an advocate for net neutrality and she also sits on the board for the Electronic Frontier Foundation. Smith is a partner at DLA Piper, a law firm that Vice President Kamala Harris’s husband previously worked at. As Variety notes, Smith was a bundler for Biden’s campaign and held a fundraiser for Harris in 2019. He also recently worked on a digital divide plan with the National Urban League.

But regardless of who Biden ultimately picks—and whether it is a commissioner or the chair—advocacy groups stressed that the president has a “critical opportunity” to pick a public interest advocate who could be somewhat of a counterbalance the ideological-bent of the Republican commissioners already at the agency, Simington and Brendan Carr.

“That fifth commissioner has to be somebody who has the public’s interest in mind,” Mark Stanley, director of communications and operations at Demand Progress, told the Daily Dot. “I think getting a third [Democratic] commissioner in there who is going to be unequivocal … and is not going to come from a corporate background where they might waver or might not do the right thing—where they might be against Title II reclassification, or want to take a weaker approach—is just not going to be what’s really necessary for this unique moment.”

Aaron, of Free Press Action, said an example of the public advocate model for a commissioner pick would be Michael Copps, who served at the FCC from 2001 to 2011.

Copps opposed a 2002 FCC rule where it classified cable modems services as an “information service” and not subject to Title II common carrier regulation. Copps has been a vocal supporter of net neutrality since leaving the agency.

Copps is now a board member for Free Press Action and Public Knowledge and is a special adviser to Common Cause’s Media and Democracy Reform Initiative.

“When I think about the potential of that seat, it’s somebody like Michael Copps—who was there for a decade and really put the ‘public’ in ‘public servant,'” Aaron said, adding that he was “one of the few commissioners to depart and go into the public interest.”

While a progressive public advocate at the FCC is the goal, Biden is not exactly known for being a staunch progressive. That, coupled with Biden’s coziness with telecoms companies—he kicked off his candidacy with a fundraiser hosted by a senior executive vice president at Comcast—does raise the question as to whether he would be motivated to actually fill the FCC with a “bold” choice.

The communications and electronics sector was also one of the largest groups to donate to Biden’s 2020 election campaign, according to the Center for Responsive Politics.

However, Aaron said he was optimistic about Biden picking someone with the public interest in mind, particularly after some of the president’s picks to other agency positions, like Rebecca Slaughter to the Federal Trade Commission (FTC) and Rohit Chopra to head the Consumer Financial Protection Bureau (CFPB).

Aaron said his optimism was partly from “paying attention to the rumor mill” and also Biden’s choice of Rosenworcel to serve as (at least) the acting-chair of the FCC.

“It’s clear they are prioritizing competence. We’ll have to see what the political courage looks like,” Aaron said, adding: “Anything’s possible, and of course there are all these forces jockeying for influence over the FCC and everywhere in the government. But I would say … for the most part, I don’t know if you’re seeing people from the industries that are going to be regulated being put into the job as regulator. I don’t think you’re seeing that in the administration.”

As Biden gets closer to making a choice, Aaron said the open letter last month was an attempt to show that a large number of advocacy groups—which in turn represent millions of tuned-in people across the country—want the president to move quickly and boldly. That kind of spotlight has shifted how exactly the administration should look at the pick, Aaron said.

“I think as an area that has gotten a lot of attention, and there has been a lot of organization, the expectations have really changed around a place like the FCC for the kind of person you should put into these jobs. It looks different than it did in 2008, or 2004, or 2000,” Aaron said.

Ernesto Falcon, a senior legislative counsel at the Electronic Frontier Foundation, agreed and argued that the time was right for a true public advocate to be named to the agency.

Instead of Biden picking someone in the same model as Ajit Pai—a former Verizon lawyer—Falcon said the president should focus on someone who has “a clear record of having the consumer interest as their priority.”

“Often the public, their frustration with a regulator often is the revolving door and the favoritism to a small set of industries. Sometimes it’s true, sometimes it’s not,” Falcon said, adding: “They’re generally, and I think rightfully so, upset with the status-quo. The status-quo has been given to them by these very incumbent companies and they need somebody who stands up for their interests in this space.”