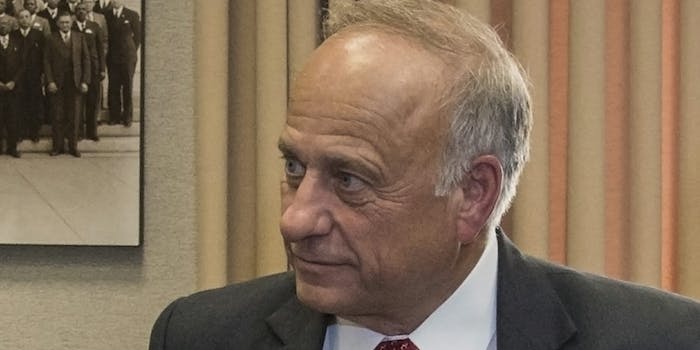 After defending Rep. Steve King (R-Iowa) for years, conservative commentator Ben Shapiro conceded on Thursday that the lawmaker’s recent embrace of the terms “white supremacist” and “white nationalist” may indicate that, yes, he may be racist.

Just hours after an explosive New York Times article was published that examined the Iowa Republicans ties to far-right groups and causes, a quote from King’s interview in the piece began circulating. In it, King bemoaned how the term “white supremacist” was deemed “offensive.”

“White nationalist, white supremacist, Western civilization—how did that language become offensive?” Rep. King reportedly said to the Times, while denying he was a racist. “Why did I sit in classes teaching me about the merits of our history and our civilization?”

On reading this, Shapiro swiftly updated an old Daily Wire post he’d written to include a denunciation of his previous defense of the lawmaker.

Shapiro’s article, written in 2017, had argued that a tweet by King about being unable to “restore our civilization with somebody else’s babies” was not racist and that the media were “lying” to frame it that way.

(It was extremely racist, and King has repeatedly made racist statements during his time in Congress.)

Quoting the congressman, Shapiro’s update to the piece states that his old article “gave far too generous an interpretation of King’s words.”

“As I stated in the article, there were two ways to interpret his statements,” Shapiro goes on to say, in reference to the 2017 tweet the article was about.

“His later open embrace of the terms “white nationalist” and “white supremacist” suggest that the first interpretation described below [that King was racist] was not as implausible as it seemed at the time.”

Shapiro then took to Twitter demanding that King be censured by Congress.

Congress ought to vote to censure him, and then he ought to be primaried ASAP. https://t.co/W2qRdWvAjj

The conservative pundit then advocated for the man who would be King’s primary challenger.

Donate to his primary challenger, Randy Feenstra, here. I plan on doing so. https://t.co/0RJIs63svi

Some liberal commentators commended Shapiro on his stance.

Wow big kudos to @benshapiro for updating an article about @SteveKingIA and changing his mind with the new evidence that's come to light. This is really hard to do and I admire Ben for his honesty.https://t.co/1yov2156E8

But most just wanted to remind the pundit of his close relationship with the congressman.

Wow way to throw your good friend under the bus, Bennie. pic.twitter.com/MDRN0C2kqE

Conservatives, meanwhile, are falling in line behind Shapiro, despite having let King’s racism slide for a long time.

I've defended Steve King, most notably on DW Backstage. I've met him a few times, liked him each time, and have not been persuaded by past accusations against him. After this interview, it's clear I was mistaken. It's time for Steve King to go. https://t.co/bSwMRqkFem

In light of comments made recently by Steve King, in which he embraces the terms “white nationalist” and “white supremacy” I can no longer just give this man the benefit of the doubt. I can no longer simply refer to the two cordial visits I have had in the past w/this man.

At the same time, King pushed out his own lengthy response to the Times article via his own Twitter page, condemning white supremacism and rejecting the newspaper’s “suggestion” that he was a “white nationalist.”

My statement on the New York Times article. pic.twitter.com/IjBHgZYgRD

King cited his denial of racism from the Times article as proof against his other comments.