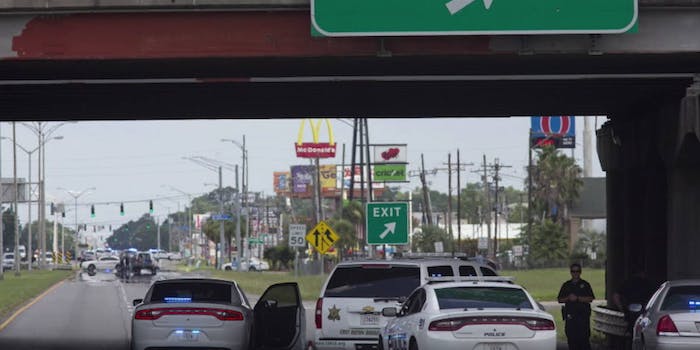 The incident claimed the lives of at least three police officers.

A shooting in Baton Rouge has claimed the lives of three officers, with six other officers injured from gunfire. The incident occurred outside the B-Quick Convenience Store on Airline Highway. One suspect is reportedly dead, while two other persons of interest are being sought by police.

Details surrounding the incident, which comes less than two weeks after the fatal shooting of Alton Sterling in the Louisiana capital city, have remained murky and at times conflicting. As information continues to emerge, so too have public statements from political figures.

The President has reportedly been briefed about the shooting and will continue to receive updates. Obama released shortly before 2pm CT.

JUST IN: Pres. Obama issues statement on #BatonRouge shooting: These attacks "have to stop." pic.twitter.com/GqukbbTdCh

Presumptive GOP nominee Donald Trump condemned the shooting on his Facebook page, appearing to implicate Obama’s leadership as it relates to this tragic event.

As of this writing, presumptive Democratic nominee Hillary Clinton has yet to make a statement. Neither has Vermont Sen. Bernie Sanders, a fellow presidential hopeful who endorsed Clinton on Monday.

Louisiana Gov. John Bel Edwards issued a statement on social media and will be holding a press conference at 3pm CT.

#lagov on the shooting of law enforcement officers in Baton Rouge today: pic.twitter.com/BU3B4Iznbe

“We are disgusted and horrified by the news of today’s attack in Baton Rouge. Our heartfelt prayers and deepest sympathies go out to the law enforcement officers, to their families, and to the entire community shaken by this assault.

As we all struggle to grapple with what seems like an endless drumbeat of horror and misery, we call on our friends and neighbors to join us in reaffirming that violence is not and can never be the answer to the challenges we face. Our thoughts are consumed with the tragedy and its victims, and our prayers are devoted to their support and comfort. But thoughts and prayers are simply not enough. We must come together, as a state and as a nation, to change things for the better and break out of the cycle of violence and death.”

Officials in Dallas, Texas have expressed their condolences as well as solidarity with the people of Baton Rouge. Dallas law enforcement faced a similarly tragic incident when a gunman opened fire during a Black Lives Matter protest and killed five officers on July 8.

Our thoughts and prayers are with Baton Rouge Police. @BRPD #PrayforBatonRouge

In a surprising move from the Secret Service, the protection agency’s official Twitter account tweeted a message of support at 11:35am CT. That message has since been deleted.

Louisianans of all stripes—from prominent political figures like David Vitter to acclaimed musicians like Make Maine—have come out against the Baton Rouge police shooting, signaling a unified state in the face of tragedy.

Update 1:54pm CT, July 17: This piece has been updated to include President Obama’s statement.

Update 4:27pm CT, July 17: In the midst of a formal speech given to the American public by President Obama, Hillary Clinton has issued a statement condemning the shooting of police officers in Baton Rouge.

Hillary's statement on the shooting in Baton Rouge. pic.twitter.com/4a0MVF3025