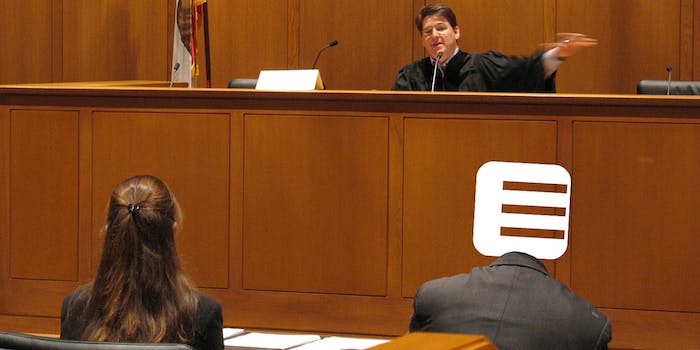 Here’s a tip: If you’re electrically administering the bar exam to 60,000 would-be attorneys, get it right, or you’ll find yourself looking down the barrel of a class-action lawsuit.

Philip Litchfield, a law student from Illinois, has retained the Chicago law firm Edelson PC to file a class-action suit against ExamSoft, the Boca Raton, Fla.-based educational assessment firm whose system failed to allow bar exam students to upload their completed exams on July 19. Frustrated and stressed by not being able to upload their exams, students already in high-anxiety mode after an entire day of grueling work on a test given only twice a year were doubly infuriated by the lack of tech support available. To make matters even worse, if that’s possible, test takers faced deadlines to electronically turn in their work or receive a grade of zero.

Regarding the circumstances that led to the system failure, ExamSoft told the Daily Dot the issue was related to a problem with network configuration settings that failed when the volume of uploads hit that evening. The company says it worked with state bar examiners to get deadlines extended. ExamSoft believes the system snafu did nothing to jeopardize the integrity of the exams.

As a mea culpa, ExamSoft’s Vice President of Marketing Ken Knotts offered this apology: “Regardless, we deeply regret this incident occurred. It was unacceptable. We’ve successfully delivered state bar exams for more than a decade. We are committed to repairing the trust users have placed in our care and we are taking every possible step to ensure this never happens again.”

But Litchfield seems unsatisfied with ExamSoft’s attempt to explain away the glitch. Backed by explosion of venom on Twitter, the class-action suit—which Litchfield’s attorneys filed Monday with the United States District Court for the Northern District of Illinois, Eastern Division—charges ExamSoft with gross negligence, consumer fraud, and deceptive business practices under Illinois law as well as breach of contract. The suit states that ExamSoft failed to adequately prepare its backend system for the concurrent uploads that would take place when the bar exam ended.

In class-action lawsuits, plaintiffs have the option of securing their own legal representative or joining forces to work with a single law firm. At least one firm, Seattle-based Keller Rohrback, smelled blood in the water and put a call out on Twitter to get a piece of this class-action lawsuit.

If you have been affected by ExamSoft’s failures, contact us to learn more about your rights.http://t.co/WluAMBNHMt #examsoft @ExamSoftFails

While this debacle—dubbed #Barghazi (among other things) on Twitter—is likely to played out in the court of public opinion as well as in various U.S. courtrooms, at least one state is filing the ExamSoft meltdown under the category “stuff happens” and plans on using the software again in the future. Gicine Brignola, executive director of the Pennsylvania Board of Law Examiners, said Pennsylvania won’t seek to replace ExamSoft after last week’s “hiccup.” The state “has been using ExamSoft for quite a while and with great success, and we still—even with this incident—have no concerns about the exam content,” she told Inside High Ed.

Photo via Eric Chan/Flickr (CC BY 2.0) | Remix by Jason Reed