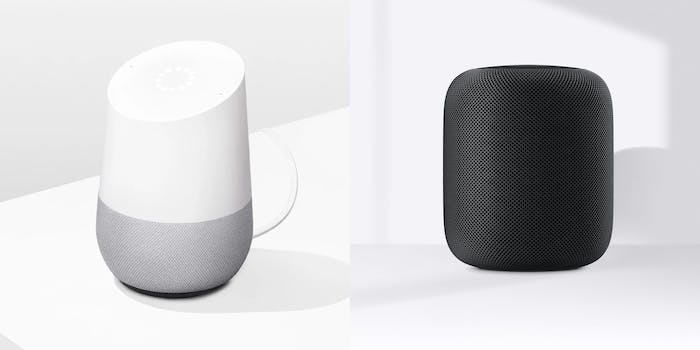 Apple HomePod and Google Home are both smart speakers. But they differ in style, privacy, and price.

If you’re in the market for a smart speaker, you may be considering the Apple HomePod and Google Home. Both respond to voice commands and connect to smart virtual assistants, so you can ask for news updates, traffic reports, and other information. Both also act as smart home centerpieces, letting you control other smart devices in your home. But they differ in price, design, audio quality, and other important aspects.

Which one is right for you? Here’s everything you need to know about Apple HomePod vs. Google Home.

Google Home is small, compact, and portable. The look definitely says “home decor,” as it resembles an air freshener or small vase. The wide, round base tapers up to an angled top. The base is swappable, so for an extra cost, you can buy extras in different materials and colors to change the look. Including the charger, it weighs less than a pound and a half, and it stands 5.62 inches tall.

Comparatively, the Apple HomePod is a fat fireplug. It’s a cylinder with rounded edges, covered in fabric that’s either space gray or white. It clocks in at a whopping 5.5 pounds and measures 6.8 inches high.

Both devices must be connected to a power source to work, so don’t be fooled by ads that show them without a cord. For the Google Home, you can optionally buy a portable battery that connects to the base to make it more portable and wireless.

Much of the price difference boils down to what’s in the guts of each product, as you’ll see in the next few comparisons of their other specs.

In the specs for the device, Apple proudly shows off the HomePod’s high-excursion woofer and set of seven horn-loaded tweeters, each with its own custom amplifier. In simpler terms, it’s powerful enough to make music sound good, without losing bass or sounding tinny. The HomePod also has features that supposedly adjust aspects of the audio that account for interference from the speaker’s surroundings.

Google doesn’t give away much about the hardware for the speaker components. Overall, it’s known for having decent quality audio for hearing information, listening to podcasts, and playing music casually. But many people do connect a secondary speaker for improved sound, particularly for music.

To set up Google Home, you need the Google Home app, available for Android and iOS.

To set up Apple HomePod, you need the Apple Home app, which is only available for iOS, but that’s only the tip of the iceberg. You also need iCloud Keychain enabled and two-factor authentication for your Apple ID.

For either device, you need the mobile app to connect compatible smart home products, such as light bulbs, locks, and intercoms. You also need it to adjust settings.

In some cases, you need your smartphone to carry out a command that the device can’t do on its own. For example, if you want to play Spotify on the Apple HomePod, you must do it through the app. Only Apple-owned music services, such as Beats 1 live and iTunes, respond to voice commands.

You can train Google Home to recognize different voices. So when your roommate says, “Hey, Google. Add a reminder to pick up my prescription,” you won’t get someone else’s to-do list.

Apple HomePod does not have any way to distinguish one person from another. It does recognize anyone who speaks to it and uses the wake word, though.

Which smart appliances and light bulbs can you connect to Google Home or Apple HomePod?

To answer that question, we have to tweak it slightly. Better: “What can you connect to Google Home or Apple HomeKit?” because technically, you connect to the app rather than the speaker. The speaker is merely an input device for controlling all the devices.

Google Home (the app) works with more compatible devices and accessories than HomeKit. The reason, in part, is Apple has stricter security requirements for devices that it allows into its ecosystem (more on that below in the Privacy section). One notable omission from Apple is Nest Thermostat.

Some of the companies making HomeKit-compatible devices are:

And here are some companies making Google Home-compatible devices:

Google Home works with many more vendors, too.

Google Home and Apple HomePod measure up equally when it comes to their buttons, ports, and interfaces. One major difference is that Google Home has a physical mute switch, but HomePod doesn’t.

Both devices have just one port, used to connect the power cord. Indicator lights blink when the device is active. On HomePod, it’s an undulating pool of light, whereas Google Home uses a few multicolored LEDs.

Both devices have touch interfaces. On Google Home, you can drag your finger clockwise or counterclockwise to adjust the volume, tap once to pause or resume, and press and hold to trigger listening without saying the wake word. Apple HomePod is similar. To change the volume, touch the +/- signs that light up when audio is playing. If you press and hold the top, you’ll trigger Siri to listen without saying the wake word. Tapping once pauses and resumes. With HomePod, you can also double tap to skip music forward and triple tap to skip backward, which the Google Home does not do.

With Google Home, everything you say, request, and buy using Google Home is associated with your Google account. (Amazon Echo with Alexa works similarly.) Different people in your household can use Google Home, and the device distinguishes who’s speaking. So if you ask Google Home to add a reminder to your calendar, it will add it to your calendar and not your roommate’s.

Differentiating who’s speaking and associating data with an individual also means that, for example, the government could subpoena Google for a record of everything you’ve said and done with it. Google technically has such records. Whether the company will give them up is another matter. The point is, the data log is there, associated with you.

Apple does not use a personal profile for your HomeKit information. In other words, it does not create one log of data about you and tie it to your username. Instead, when you ask HomePod to carry out a command, Siri makes a request to the cloud using a random identifier. If Apple needed to dredge up evidence of something you said in your home, it would be nearly impossible because the company has no way to figure out which of the random identifiers is associated with you and your actions. That may sound better than Google Home, but there is a hitch.

HomePod does not distinguish among voices, but it will carry out commands that anyone asks of it. If the HomePod is connected to your Apple ID and iCloud account, and your kids, roommate or significant other ask Siri to read text messages aloud, it will read your messages. Effectively, anyone in your home can snoop on you.

Google Home is less expensive, works with more smart home products, and can differentiate between voices in your household to give each person individualized answers and results. Apple HomePod is a more powerful speaker when it comes to audio quality and does a better job of keeping your information anonymized and therefore private.

If you’re choosing between the two products, those points of differentiation are likely the most important ones to consider.