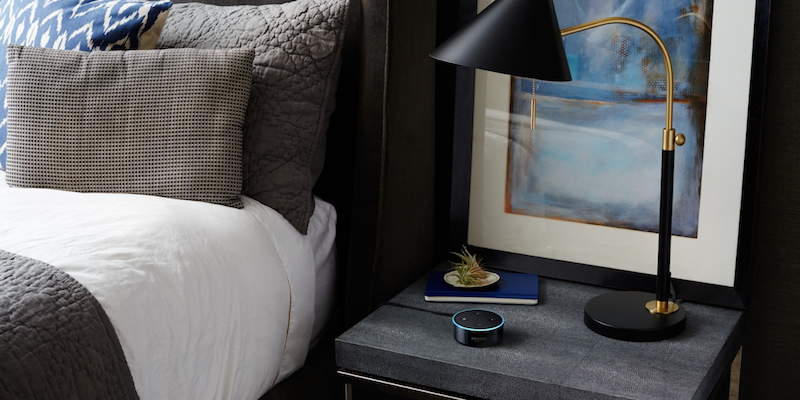 How does Amazon’s Echo Dot work?

The Echo Dot is the Amazon Echo's tiny cousin.

You may be familiar with the Echo, Amazon’s cylindrical voice-controlled smart speaker. To use the Echo, you first summon Amazon’s digital assistant, Alexa. The Echo isn’t the only Alexa-enabled device Amazon offers, though. Among its growing suite of offerings, it also offers a pint-sized alternative: the Echo Dot.

Now in its fourth generation, the Echo Dot is better than ever. If you’re on the fence about whether an Echo Dot is right for your home, here’s what you need to know.

What is the Echo Dot?

The Amazon Echo Dot is a small smart-speaker—that is, it connects to your Wi-Fi network to work as an all-in-one digital assistant. Past incarnations have looked like a hockey puck, but the device has undergone a redesign.

Now sporting a spherical look, the Echo Dot comes in black, white, and kid-friendly “tiger.” While it can be controlled by voice and the Alexa app, the Dot also has physical power, mute, and volume controls on top.

How much does the Echo Dot cost?

If you’re looking to dip your toes into the smart home market, the Echo Dot is a great place to start. The Echo Dot is an incredibly affordable product and comes in three different models.

Echo Dot starts at $34.99, with the basic Black model coming in Charcoal, White, and Twilight Blue.

Users who’d like a front-facing clock on the device will need to buy the $59.99 Echo Dot with Clock. This model comes in White and Twilight Blue.

There’s also a special Echo Dot Kids with advanced parental controls is available for $44.99. Your kids can choose between Tiger and Panda designs for this model.

Finally comes the $99.99 Echo with Premium Sound and advanced controls. Its powerful speakers boast clear highs, deep bass, and dynamic rid-ranges. This model also as a smart home hub feature that automatically finds and connects to your devices via voice command.

There’s even one for The Mandalorian fan. The stand is shaped like, who else, but baby Grogu. This one is available for $59. But don’t stress the price, Amazon devices regularly go on sale.

How to set up the Echo Dot

To get started with an Echo Dot, first make sure you have the Alexa app downloaded. Then, decide where you want your Echo Dot to reside and plug it in. The ring around the top of the device will glow blue, then orange. Now, you’ll need to connect the device to your home’s Wi-Fi network.

Once connected, the setup process should automatically begin in the app. If not, head to Alexa Devices, then select Add Alexa Device within the app. When that’s done, you’re ready to start talking to your device.

What can the Echo Dot do?

1) Home assistant and entertainment in one device

The best part of the Echo Dot is how easily it does menial tasks you’d normally need to pull out your phone for. Thats thanks to the Alexa smart assistant software. When you’re cooking or working out it’s nice to keep your hands free setting a time. Just ask Alexa.

Similarly, Alexa on Echo Dot is handy for quickly setting reminders and dates in your calendar. Check your appointments and the weather when you wake up by asking. Save yourself some screen time.

Alexa can even answer basic questions for you by searching online. If you’re easily distracted by screens, it’s a nice alternative when working.

Want to play your favorite Replacements or Black Pink song? Ask Alexa to play it in Spotify, Apple Music, or Amazon Music. If your Alexa enabled smart TV is connected to the same network, you can use Alexa as a voice remote. Control your TV in another room if you like.

With Alexa the Echo Dot allows you to control all the smart devices in your home. This goes beyond pulling up something on Netflix and feels Sci-Fi the first time you use it.

Control your smart locks, turn off Bluetooth lights around your home, and even control the thermostat with a voice command.

3) It works as a home intercom system

If you have more than one device in your home, you can also use your Echo Dot as part of an intercom system. This is useful if you live in a larger, multi-bedroom home.

You can “call” specific Alexa units in the house (say “The kitchen” to “Lisa’s bedroom”) to let a family member know that it’s time for dinner or that a neighbor has stopped by. It’s a bit more civilized than yelling across the house and significantly cheaper than installing an actual intercom system.

4) Multiple ways to control the device

While you’ll use voice commands most of the time with the Echo Dot, we appreciate voice isn’t the only method. You can control the Echo Dot with the Alexa smartphone app or its top buttons. The top buttons are particularly useful when you have less tech savvy visitors.

The Echo series of devices has improved its privacy over the years. Gone are the days of Alexa creepily laughing for no reason. You can tell when your Echo Dot is listening because its light will glow.

All Alexa devices record your interactions, but these recordings can be deleted on Amazon’s site. You can even delete them via voice controls. Just say “Alexa, delete everything I’ve ever said.” Yes, it will feel strange to say that.

6) It can work as a home security device with Guard

The Dot can be set up to work with Amazon’s Guard service as a security device. If it detects the sound of breaking glass or a fire alarm, your Echo Dot will send you a mobile alert. Unlike the standard Echo Dot, with Guard, you can get help in an emergency. Just say “Alexa, call for help.”

For more on how to use and customize Alexa, head here.

What are the downsides to the Echo Dot?

While the Echo Dot lets you know when it’s listening, sometimes it will start without warning. Occasionally it will hear a word that sounds like Alexa, and activate. That can feel unnerving.

Amazon allows you to customize just how much information the Dot takes in. However, no matter what, you’re still living with a live microphone. These concerns go for all smart devices, not just one’s from Amazon.

The sound quality on the 4th generation of the device doesn’t live up to its ancestors. Reviews and consumers alike have complained about its lack of bass and softer volume. This stems from the device changing from 360-degree audio to a new forward-firing speaker.

That is a big downgrade if you use Echo Dot’s for simple surround sound in your home. However, at $49.99 this still an incredible product. Just don’t expect top of the line sound.

The old device design was a sleek, easy to hide, puck shape. With the 4th generation, Amazon has made the Dot a snowball sized globe. This model is much harder to hide around rooms for easy sound and fits in fewer places. The design also makes you reach around the Dot to access its buttons. This is a great example of fixing something that wasn’t broken.

This is a minor complaint. However, for a low profile device, Dot’s cloth covering is harder to clean than the original plastic. Be mindful of dust, because you won’t want to try and clean off several months of build-up.

If you’re looking to get a virtual assistant-imbued smart speaker on a budget, the Echo Dot is a good option. Particularly if you already have one or more Alexa-enabled devices in your abode but want to expand.

Shoppers who want a smart speaker for high-quality sound, may be better served by purchasing another model. Consider the Echo Dot with Premium Sound or the Echo Studio if you’re an audiophile staying within Amazon’s ecosystem.

These devices feature better audio internals, and can thus playback music with higher quality and louder volumes. However, Echo Dot is perfect if you’re just looking for a great, simple to use smart speaker for cheap. Stay connected to your smart home and play music in the kitchen. Easily communicate with your kids in another room. This is a budget device with big-budget features.

If you’ve never used a smart device, the Echo Dot is a great entry point. For the cost of a night out at the movies (including popcorn and a drink) you can see what the smart home hype is all about.

Advanced users, or people with money to spend, should consider advanced $99.99 Echo Dot with Premium Sound. Otherwise, the basic Echo Dot is an incredible starting place for the smart home revolution.