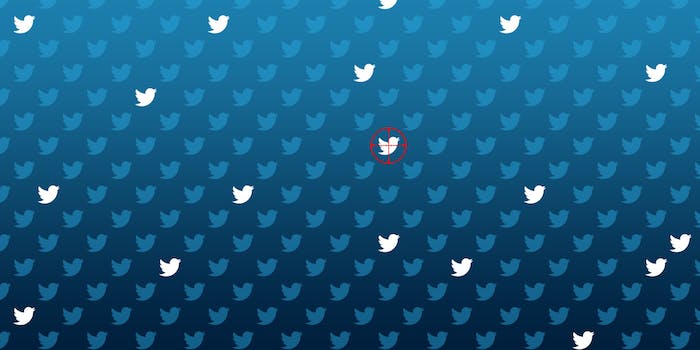 Hacktivists operating under the Anonymous banner say they’ve gotten more than 5,000 Twitter accounts affiliated with the Islamic State knocked off the site since Friday.

Anonymous’s anti-ISIS campaign is part of a broad attempt to make using the Internet harder for members of the terrorist group that’s claimed territory in Iraq and Syria. Anonymous offshoots have been hindering ISIS Twitter accounts for months, though many started or renewed their efforts after Friday, when an ISIS-affiliated group attacked Paris with guns and bombs, killing at least 129 people and injuring hundreds more.

Twitter has been a consistent recruiting ground for ISIS, which in January was estimated to have some 45,000 accounts, though it’s since somewhat moved to other social media sites, most notably Telegram. In a previous conversation with the Daily Dot, a Twitter spokesperson stressed that, like many sites, Twitter doesn’t actively monitor user content, and it instead relies on fellow users to report violent and abusive activity. In other words, concentrated efforts to identify and mass-report ISIS accounts is the best way to get them suspended.

In one message widely attributed to an Islamic State official channel, an ISIS member calls Anonymous “idiots” and encourages them to practice basic security online.

Anonymous has far more plans for ISIS than just disabling Twitter accounts, however. Various users who claim the designation say they’ll use distributed denial-of-service (DDoS) attacks to kick their sites offline with a flood of traffic. Others say they’re doxing—revealing personal information—of ISIS members to rebel groups fighting the militant jihadists in Syria.