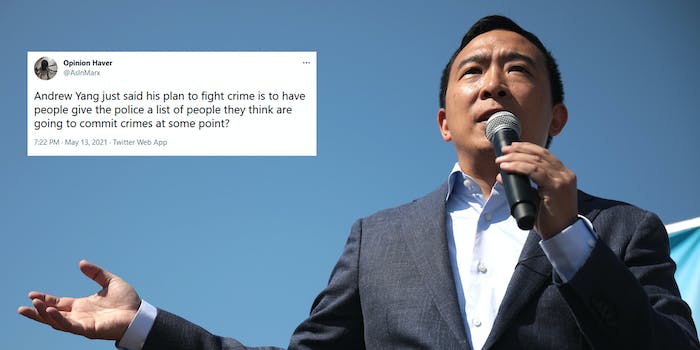 People called out Yang for his policing plan.

New York City mayoral nominee Andrew Yang detailed part of his law enforcement policy on Thursday during a mayoral debate, and people are saying it sounds a lot like snitching to cops.

Yang made it clear that he would bolster the police force in the city and reject any plans to defund the police, after cities around the country cut budgets for law enforcement following the Black Lives Matter movement.

“The first thing I do as mayor is go to our police force and say that ‘your city needs you, your city needs you to do your jobs professionally, responsibly and justly,” Yang said, adding: “And let me be clear ‘defund the police’ is the wrong approach for New York City.”

Instead, Yang wants community members to name to police who the “troublemakers” are. Yang spoke about his police strategy in the NYC mayoral debate.

“We need to evolve to a 21st century form of policing, a new anti-violence and community safety unit that would work with community leaders, plain clothed cops would go into communities and concentrate on getting the guns out,” Yang began.

He describes his plan as “focused deterrence” and “intelligence-led policing.”

“Because the fact is a lot of communities know who the troublemakers are and if you can bring them in and say ‘look if something happens in your neighborhood, you’re gonna be one of the first people we call,’ then you can start to get the rates down,” Yang said.

While Yang may have labeled it as “focused deterrence,” many people on Twitter thought it sounded like snitching to cops or something out of the movie Minority Report.

“Andrew Yang just said his plan to fight crime is to have people give the police a list of people they think are going to commit crimes at some point?” one person tweeted.

“Apparently I missed an alternate universe where andrew yang is competent and thoughtful. Here in the darkest timeline, andrew yang called for preemptive police harassment of Black and Latinx New Yorkers, + more cops in subways, and displayed zero vision otherwise on other issues,” another tweeted.

“Yang put together a word salad of police policy buzzwords at some point, like ‘anti-crime community policing,’ it was so hilarious, like a guy who’s idea of public safety strategy up to this point is how fast to dial 9-1-1 to arrest the homeless man outside of his WeWork office,” another user added.

“Not Mr. Andrew ‘we can’t afford to defund the police’ Yang, please. Will take any other candidate within reason,” someone else said.

“Yang wants poor people to rat each other out for precrime while he gets tighter with Wall Street,” another added.

It’s the second time Yang faced criticism this week. On Tuesday, Yang tweeted in support of Israel as the country and Palestine spiral into conflict.