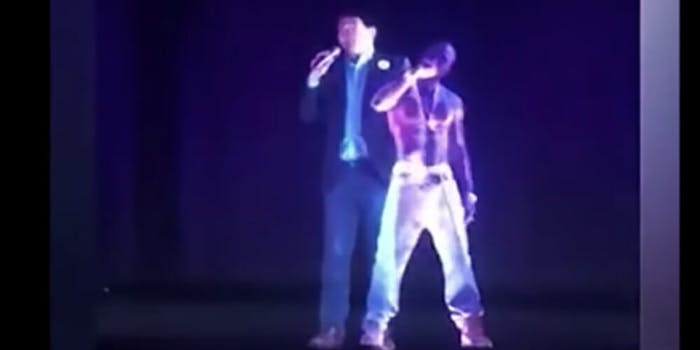 A hologram of Andrew Yang is hitting the campaign trail

The 3D hologram could allow him to be in up to three different places at once.

Andrew Yang is the entrepreneurial techie of the 2020 presidential race. So perhaps it’s not that surprising that the democratic hopeful is planning to send a hologram of himself to the campaign trail, according to the Verge.

The 3D hologram could allow him to be in up to three different places at once, Yang said on TMZ Live Wednesday.

Me trying out being a hologram with hologram Tupac 👍 pic.twitter.com/IclQvAa27z

Yang demonstrated the technology by showing his hologram performing on stage with another hologram, the late Tupac Shakur. The two were “singing” a duet of Shakur’s “2 of Amerikaz Most Wanted.”

Asked if hologram Tupac would be his running mate, Yang replied, “No, he’s just a hero of mine in another sense, but not my running mate.”

Many of Yang’s campaign promises revolve around technology. For example, Yang wants funding for medical technology innovation, as well as regulations for technology like artificial intelligence, according to Vice.

“When I saw the technology in action, I enjoyed it a great deal,” Yang told the Carroll Times Herald. “So, for folks in Iowa and other places, I think it will just be a fun way to experience it. It might be even more fun than seeing me in person.”

Yang said he plans to send the hologram to campaign for him in battleground states like Iowa.

Campaigning in as many places as possible has become a key to winning elections. One reason many analysts believe President Donald Trump had an advantage over Hillary Clinton in the 2016 presidential is because he took the time to visit places like rural Iowa. Another 2020 hopeful, Beto O’Rourke, made Texas competitive after famously visiting every single county in the state while campaigning for a Senate spot.

With the hologram, it could be impossible for a candidate to personally visit every single county in the U.S.—so maybe Yang is onto something.