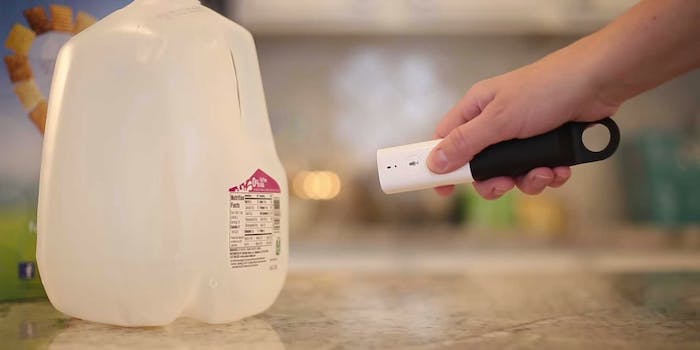 Amazon thinks the future of grocery shopping is via remote control

If Amazon’s latest venture is a success, people soon won’t be able to remember a time when they didn’t use a remote control for their grocery shopping.

This week, the online retail giant began a soft rollout of Amazon Dash, a Wi-Fi and voice enabled barcode scanner designed to make shopping at home easier than ever.

The six-inch, handheld device is part of an effort to promote AmazonFresh, the company’s urban grocery delivery service. Dash lets users either scan the barcodes of grocery items that need to be replenished, or it allows users to speak into it like a microphone and add a new items to their grocery list that way.

A demonstrative video for the device does make it seem pretty neat. And evidently, it’s not just for groceries. Dash recognizes millions of items from both AmazonFresh and Amazon.com. However, you don’t buy things with Dash. It merely adds items to a list that must then be ordered from either a computer or smartphone.

So far, the Device is currently available on a free trial basis to a limited number AmazonFresh customers in Southern California, San Francisco and Seattle. Interested customers can sign up on the Amazon Dash website.

Of course, it’s one thing to put out a highly-polished presentation video. Field testing will show just how effective Dash can be. As Siri has proven, voice recognition technology is pretty good, but still prone to silly mistakes.

Dash is just the latest in a steady stream of would-be innovations coming from Amazon. Late last year, the company made headlines when CEO Jeff Bezos announced plans to launch a fleet of delivery drones that will fly smaller packages directly from Amazon distribution centers to people’s homes.