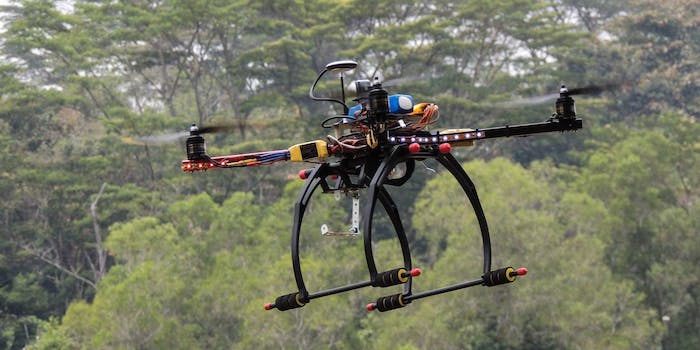 You can now insure your drone through AIG

Flying is a liability.

That’s a nice drone you have there. It’d be a shame if something were to happen to it. Now you can get insurance for your quadcopter to make sure if anything does go wrong, the damage won’t be done to your wallet.

AIG—the lone insurance company without a ridiculous mascot that appears in all its ads—is offering amateur and commercial pilots alike coverage for when their aircraft go awry.

Policies through AIG offer wide-ranging coverage for operators of the unmanned vehicles. The insurer will cover physical damage to the aircraft, installed or carried equipment, and electronic malfunctions—an area that is typically excluded on manned aircraft policies. Policies also cover the pilot and non-pilot personnel like on-ground crew, as well as third-party liability for all those windows you accidentally crash through.

AIG even offers protection for in cases of very ominous and terrifying sounding situations including “war, hi-jacking, and terrorism.” In less doomsday-like scenarios, this would also extend to unlawful seizure or “wrongful exercise of control by means of ‘spoofing.'”

The cost of coverage will vary depending on aircraft and how you intend to use it. A low-cost model you never take past your backyard, for example, likely doesn’t require coverage. But if you’re taking out a drone that can travel a considerable distance and has a 4K camera attached to it, you’re likely more interested in making sure it doesn’t end up an uninsurable pile of burning parts.

Because the markets for both recreational and commercial drones host a wide variety of usage potential and are growing quickly with little formalized regulations in place, it’s difficult for insurers to devise coverage plans. Claims Journal explains some homeowners’ policies will cover personal drone use. This possibility depends on the specific language of a person’s policy, though.

While homeowners’ insurance often will exclude liability arising from aircraft usage, there is generally an exception for “model or hobby aircraft.” Many drones would fall under that exception, meaning damage caused by those crafts would be covered.

On the commercial side, things get even more confusing. Homeowners’ insurance likely won’t offer any protection for business activities, and the line on what is considered a business activity could become murky. If you upload a video of drone footage to YouTube and generate revenue off of it, does that count as business use? There is no clear answer, though Claims Journal suggests receiving any sort of compensation for drone use will “probably jeopardize their homeowners’ coverage.”

As of August 2015, the Federal Aviation Administration (FAA) has issued 1,000 commercial drone permits, but the rapidly growing industry still lacks regulatory standards when it comes to insurance and liability.

Outside of the United States, there are some guidelines that may be informative. Canada currently requires commercial drone operators to obtain $100,000 in liability insurance, while the European Union requires that drones of a certain size to meet a minimum third-party liability requirement.

As more formal regulations are established within the U.S., insurance companies will navigate the requirements and establish additional coverage for pilots of unmanned aircraft. Until then, AIG appears happy to fill the void.