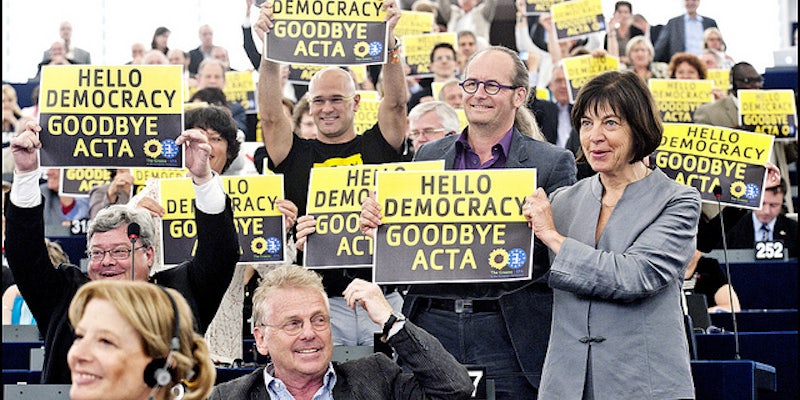 The treaty would have created invasive powers to police file sharing online.

In a decision Wednesday, Members of the European Parliament voted overwhelmingly to reject ACTA: 478 to 39, with 165 abstaining.

As a result of the decision, neither the EU nor any of its members can join ACTA in its current form, which is already signed by major players like the United States, Australia, and Japan.

“The states involved in ACTA have always said that the agreement would be ‘dead’ if the EU did not sign it,” said Joe McNamee, a representative of the activist group European Digital Rights.

“Countries that signed will not ratify and it will be left as a signed but unratified treaty.”

There’s little doubt that a groundswell of popular opposition helped the decision. Internet activists in dozens of cities around Europe held multiple protests and delivered a petition signed by 2.8 million people. In a statement, the EU said an “unprecedented” number of citizens directly asked their representatives to reject ACTA.

But there’s no rest for the weary. Another multinational trade agreement that, while yet not finalized, is also expected by privacy activists to allow member countries to police the Internet, The Trans-Pacific Partnership (TPP), is currently being negotiated behind closed doors Wednesday. The TPP involves a number of nations, including the United States, but none in Europe.