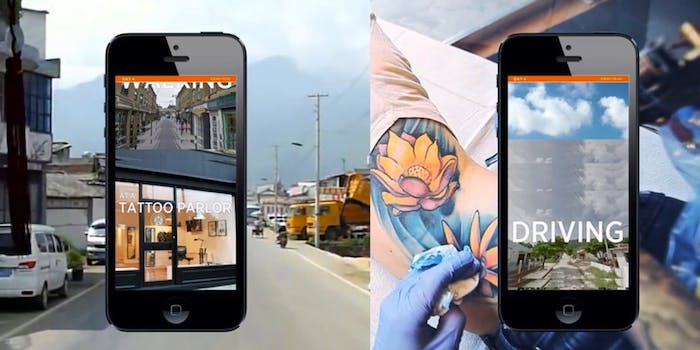 No stranger danger here: ‘20 Day Stranger’ gives users a glimpse into the lives of others.

Every day for 20 days, the people beta-testing the MIT Media Lab’s latest app get a series of mysterious updates. “At a cafe.” “In an airport.” “Biking.” “At a tattoo parlor.”

These vague updates are tantalizing glimpses into the day-to-day life of a complete stranger. They don’t provide identifying information, nor do they encourage users to share who they are.

20 Day Stranger, the app sending these updates, matches two users up and gives them peeks into each others’ lives for (you guessed it) 20 days. The app takes data from Instagram, Foursquare, Google Maps, and other services, and figures out general information about user activity. Then it passes that information along to the other user, dropping tidbits about the life of an unknown other into their counterpart’s app.

The point isn’t to foster a long-term friendship or provide clues so users can untangle each other’s identities. 20 Day Stranger purposely keeps identities anonymous and dangles only vague information to urge users to use their imaginations. It’s less voyeuristic than impressionistic.  “The idea isn’t to make your life transparent, it’s to give just enough to wonder and imagine and ultimately, to care,” Kevin Slavin, the director of the MIT Media Lab Playful Systems group, told the Boston Herald.

And after 20 days, users can only send each other one message, so the app builds in an end date to the relationship.

Now, 20 Day Stranger is late to the anonymous app game. Apps like Whisper, Secret, and YikYak have been some of the biggest success stories of 2014, and they all let users express themselves without revealing their identities. These apps foster conversations between complete strangers, too. But they’re not designed to promote empathy. They’re platforms for anonymous sharing with a focus on announcing to a wider audience of many, be they localized (like on YikYak) or already somehow connected as contacts (like on Secret). Yes, people can strike up one-on-one friendships on these apps, but that’s more of a side effect than a goal. 20 Day Stranger also relies on anonymity, but it has a very different purpose: Instead of focusing on encouraging users to post to an audience of strangers, it encourages users to receive information about a single stranger, to use the minutia and flotsam of an unknown’s life as a catalyst for imagination.

H/T The Verge | Screenshot via Vimeo