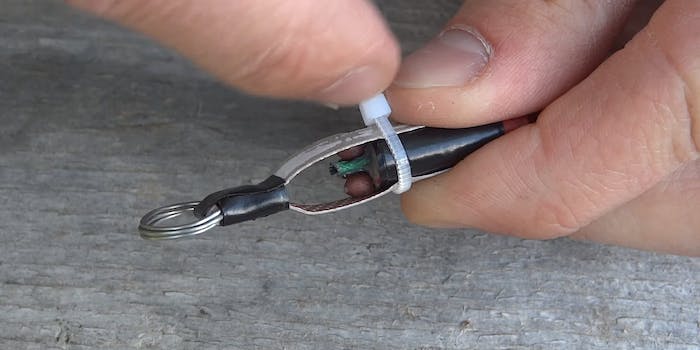 These tutorials could be a real problem, expert says.

If you want to make a bomb, there are multiple ways to discover how online. You can buy a copy of The Anarchist Cookbook. You can look on Facebook or even Amazon.

But if you want to create an explosion that’s set off by a tripwire, which is apparently how the fourth Austin bombing in less than a month was activated on Sunday night, you can watch tutorials on YouTube.

In a matter of minutes, the Daily Dot on Monday found five videos that describe how to use tripwire to cause an explosion. The tutorials were informative and effective—and relatively short in length—walking the viewer through the process.

One details how to make a firecracker explode when it’s tripped by an ankle-high wire that’s nearly impossible to notice. One demonstrates how to set off a Party Popper with a tripwire. One video with more than 6 million views shows you how to use a clothespin, a battery, thumbtacks, wiring, and glue to make the device.

The most disturbing title of all the videos is “How To Make A Wire Trip Bomb,” and in the description, the YouTuber writes, “In this video i am going to show you how i made a trip wire bomb at home. It’s pretty easy to make and you can have tons of fun with it.”

These videos might seem innocent on the surface. But according to Ryan Morris, founder, and CEO of a tactical training center in Pennsylvania that prepares first responders, they could prove harmful.

“You could modify [these videos] to put in an explosive [element] or make it into a pipe bomb,” Ryan Morris, CEO of Tripwire Operations Group, told the Daily Dot on Monday afternoon. “And it just shows you how to do it.”

While the first three bombs that exploded in Austin this month were placed in packages, police said the latest might have been caused by a tripwire set up in the road. (A package believed to be bound for Austin exploded in a FedEx facility early Tuesday morning.)

Brian Manley, the city’s interim police chief, said that tripwire bomb shows an increased level of skill, and Christopher Combs, a special agent out of the FBI office in San Antonio, told the Washington Post, “With this tripwire, this changes things. It’s more sophisticated.”

It’s unlikely that this particular bomber learned his tripwire skills on YouTube. “The device’s success, despite significantly different design, further suggests that the bombmaker behind these attacks is an accomplished one, and has likely to have received some training, perhaps as a military or police explosive ordnance disposal technician,” Stratfor, a geopolitical intelligence platform, told CNN.

But just because this particular bomber (or bombers) might have sophisticated training, that doesn’t mean a potential copycat couldn’t get ideas from YouTube.

The videos the Daily Dot found are most likely not aimed at potential domestic terrorists and would be fine for most reasonable adults to watch. But considering most of them use the word “explosive” in the title, the risk is apparent.

It’s yet another example of Google’s recent struggles to effectively monitor and manage the content its hosts post. In recent months, the company has been heavily criticized for the ways in which it harbors videos promoting white nationalism and presents dangerous videos to children. Just this week, YouTube confirmed that it removed conspiracy theory videos from YouTube Kids, its platform created specifically for small children.

But problems run far deeper. The site was criticized for its delayed response when Logan Paul, one of the most popular vloggers on the platform, posted a video of a dead body he found in a Japanese “suicide forest” late last year. And the company has yet to adequately address problems with its algorithm that reward conspiracy theory channels with millions of views every time there’s a mass shooting or a national tragedy.

YouTube CEO Susan Wojcicki said last week that YouTube has been working to fix its issues. The site altered its homepage last year to give viewers more accurate content, and she said the site will install “information cues” alongside some videos that link to additional information if they contain controversial subject matter. YouTube also pledged to hire 10,000 people by 2018 to help moderate content that could violate its policy.

Admittedly, taking down these tripwire videos won’t prevent new explosives from being created. “All the information is out there,” Morris noted. “It’s just about how badly you want the information.”

But that doesn’t mean that YouTube should make it easy to find—or even host it.

YouTube did not respond to a Daily Dot request for comment when these videos were brought to its attention on Monday.