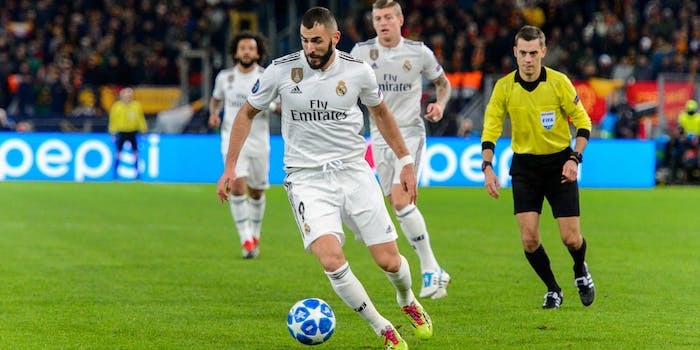 How to watch Real Madrid vs. Getafe online for free

Real Madrid is still aiming for one of its customary top two sports in the La Liga standings; they’ll try to keep pace with rivals Atlético Madrid, whose 3-2 victory over Valencia on Wednesday elevated them to seven points ahead in the standings. (The win also delayed Barcelona in clinching the La Liga title, perhaps of some small consolation to Real fans.)

Real Madrid’s opponent on Thursday, Getafe CF, is currently below them in the standings in fourth place, though they are a full 10 points behind. Getafe, which finished eighth last season, is hanging on to the final Champions League spot, just two points ahead of both Sevilla and Valencia.

Each of the following services carries beIN SPORTS, providing a one-week trial and therefore an easy way to watch Real Madrid vs. Getafe CF for free.

Real Madrid vs. Getafe CF: Why it matters

Los Blancos has fallen short of its aspirations this year; they’re officially out of the title race in La Liga, and they’ve also been knocked out of the Champions League. You could say Cristiano Ronaldo moving to Juventus is just losing one player, especially in a squad of Galacticos that includes the reigning Best FIFA Men’s Player in Luka Modric and a revitalized Karim Benzema, but it’s looming larger than ever now that one of the team’s top two rivals will lift the trophy. Still, they’d like to do better than repeating last year’s third-place finish; it’s not technically a must-win match, but anything less than a win will worsen their position.

Getafe, meanwhile, could be the surprise of the La Liga season if they can close out the season in a Champions League place. They handled their business on Sunday by beating Sevilla 3-0 to climb into fourth but face an obvious test on Thursday and they still have a La Liga date with Barcelona on May 12 as their penultimate match. Jamie Mata, Getafe’s top scorer with 14 goals, has impressed enough to earn a recent call-up to the Spanish national team.