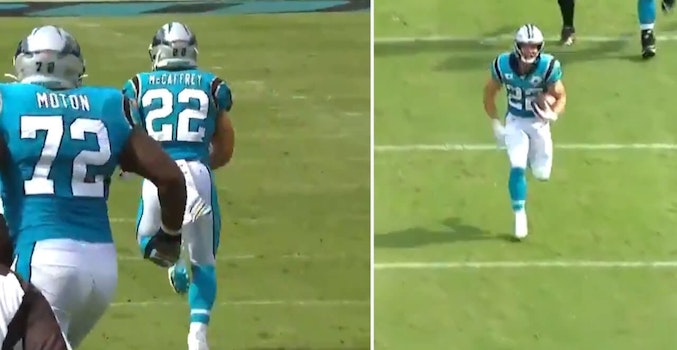 How to stream Panthers vs. Buccaneers Week 6 London matchup

Two surprisingly scrappy teams fight for second place in the NFC South in a matchup across the pond.

Though the Carolina Panthers and the Tampa Bay Buccaneers aren’t the most complete teams in football, you get the sense that either of these teams could beat anyone in the league if things went their way.

Despite getting beaten by Teddy Bridgewater and the Saints last week, we are only two games removed from the Buccaneers 55-40 stomping of the Rams. Surprisingly good play from running back Ronald Jones II and receiver Chris Godwin has helped an improved Jameis Winston get this offense into shape.

While the Buccaneers secondary is not very good, other than in the Saints game, their defense played well overall. The team’s pass rush has been generally been effective. Plus, Shaq Barrett has nine sacks on the season so far, and the Bucs have had some really effective weeks stopping the run.

With Cam Newton injured, Christian McCaffrey carried the Panthers on his back last week against Jacksonville. McCaffrey was an unstoppable force with 237 total yards and three touchdowns on the day.

McCaffrey has the power to change a game by himself, but the emergence of D.J. Moore and the solid play of Kyle Allen in relief of Newton have been nice surprises, as well.

The Panthers have been pretty good on defense, with players like outside linebacker Brian Burns and safety Eric Reid coming up with big plays when it counts. While this might not be an elite unit, when they click, they can make good quarterbacks look bad, as they are a top pass defense.

Overall, this feels like a close matchup. It’s hard to tell which of these teams is going to show up on a given week. If we get the Buccaneers team that beat the Rams, then Panthers should be scared. If McCaffrey gashes this unit like he did the Texans and the Jaguars, then the Panthers should cruise.

Add in the wildness of this being a London game, and we’ll go ahead and shy away from any firm prognostications on this one.

The only way to watch the NFL’s slate of London games, including Panthers vs. Buccaneers, is with NFL Network.

If you want to watch the Panthers vs. Buccaneers online via Sling TV, you’ll need to be subscribed to either Sling Blue ($25 per month) or Sling Orange + Blue ($40 per month). Both of those packages include NFL Network and a number of sports channels—like three ESPN channels, NBCSN, and FS1—and it’s still a nice perk that Sling subscribers can order a la carte packages. Sling TV also offers a special Latino package for bilingual viewers. Sling TV is currently offering a deal where you can subscribe for 40% off the regular price for the first month of your subscription. That means Sling Blue would cost $15, and Sling Orange + Blue would cost $25. (Here’s a complete guide to Sling TV channels and our Sling TV review.)

D.J. Moore, Wide Receiver: If you have Christian McCaffrey, you are starting him, so we’ll recommend someone else. Moore is a nice flex option here. For instance, he has steadily gained more receiving yards each week Kyle Allen has started, and the Buccaneers secondary is very soft. If you’re plagued with bye week issues, Moore could be a nice bench play during this game.

Ronald Jones II, Running Back: The Panthers have a very good pass defense, though if you have a top Buccaneers receiver, you are probably starting them anyway. Also think about starting Jones against a run defense that just gave Leonard Fournette a 100-yard day.

Carolina Panthers vs. Tampa Bay Buccaneers: Why it matters

Any hope these teams have of catching up with the Saints is quickly fading as Teddy Bridgewater has proven capable in Drew Brees’ absence. However, these teams are frisky enough that they could be contenting for a wild card late in the season.

Both of these teams are also perfectly capable of letting opportunities slip away. The Panthers and the Buccaneers have a habit of letting close, winnable games slip through their fingers. It’s possible to imagine one of these teams making a run and landing in the playoffs, but that would likely happen at the expense of the other.

The Buccaneers and the Panthers could both really use a win here. Firstly, Tampa is slightly more desperate, as a loss here would knock them to 2-4. However, a Carolina loss would mean the Buccaneers have beaten them twice already and own any tiebreakers.

It’s hard to tell how this game will go, but it could well be one of the most exciting matchups of the week, as two uneven and evenly matched teams mix it up in London.