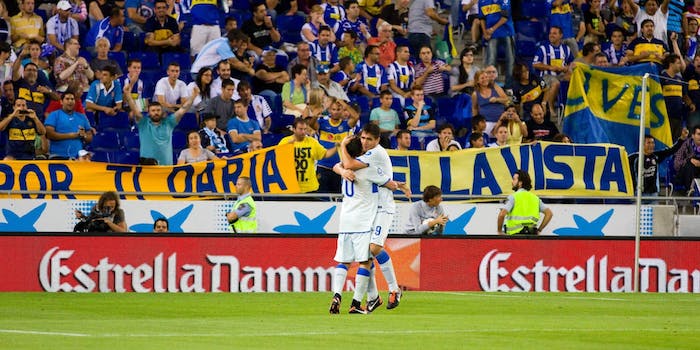 How to watch Copa Libertadores online for free

The Copa Libertadores, with top teams from throughout South America, is CONMEBOL's answer to the Champions League.

South America has long been a dominant soccer continent, best expressed in its World Cup victories and its history of transcendent players like Pele, Maradona, and Messi. The continent also has a long, rich history of professional leagues, and its top club teams face off in a massive annual tournament known as the Copa Libertadores. Here’s everything you need to know about Copa Libertadores and how to watch it online.

What is Copa Libertadores?

Copa Libertadores, which started in 1960, is also known as CONMEBOL Libertadores. (CONMEBOL is the federation of 10 South American soccer-playing nations.) The tournament has had different looks and configurations throughout its history, but now resembles its European cousin, the Champions League. Like the Champions League, the Copa Libertadores features 32 top-performing teams from the 10 nations’ top-flight leagues. (The field actually starts with 47 teams but is winnowed to the more tournament-friendly number through a series of qualifying matches.) The teams initially compete in eight four-team groups, with the top two from each group advancing to a 16-team knockout phase.

The 2018 edition saw bitter Argentine rivals River Plate and Boca Juniors advance to the finals, which proved troublesome given the two-leg home-and-away format of the finals. While the first leg in Boca’s stadium finished in a 2-2 draw, the initial second leg match was postponed after Boca’s team bus was attacked en route to the match by overzealous River fans. River won the match, which was moved to Madrid two weeks after its initial date due to ongoing safety concerns, with emerging star Pity Martinez scoring the second of two extra-time goals in his final match for the club before joining MLS champs Atlanta United.

This year’s final will just be a single match—and it won’t take place until Nov. 23 in Santiago, Chile. The knockout phase will start in late July and continue through late summer and fall.

It’s been nearly 20 years since one team has won back-to-back tournaments, with Boca Juniors pulling off that feat in 2001. The top five all-time winners are Argentine, led be Independiente with seven, Boca Juniors with six, Uruguay’s Peñarol with five, and River Plate and Estudiantes with four each.

Which Copa Libertadores teams should I know?

A number of the best-known club teams from South America have qualified for the group stages of the 2019 edition.

Argentina, with seven slots, is again represented by River Plate and Boca Juniors, as well as San Lorenzo and Huracan, two Buenos Aires-based teams that have their own ongoing rivalry. San Lorenzo gained international attention in 2013 with the ascendancy of Pope Francis; the leader of the Catholic church is a lifelong fan of the team.

The other eight CONMEBOL numbers get four slots each. Ten teams, including Uruguay’s Nacional and a trio of Paraguayan teams—Olimpia, Libertad, and  Cerro Porteño—have already advanced into the Round of 16. Boca Juniors, Gremio, and Chile’s Universidad Católica are among the biggest clubs in South America still needing the final group matches (May 7-9) to determine whether they’ll graduate past the group stage into the knockout stage.

Each of the following services carries beIN SPORTS, providing a one-week trial and therefore an easy way to watch Copa Libertadores matches for free.

Adrian Martinez, Libertad: The Argentine striker is a recent addition, moving from another Paraguayan Primera Division team, Sol de America, this past December, and has netted six goals to lead Libertad safely through the group stages.

Ricardo Oliveira, Atlético Mineiro: At age 38, the Brazilian striker is still profilic; he has played for pro teams in Spain, Italy, and the United Arab Emirates in a distinguished career now nearing the 20-year mark.

Fred, Cruzeiro: The Brazilian player born in 1983 (not to be confused with the Fred born in 1993 playing for Manchester United, or the journeyman former MLS player born in 1979) had a five-year stint in Lyon but has played most of his pro soccer in Brazil. He has a claim to one of the fastest goals in world soccer history, just 3.17 seconds into a U-20 match.

Marco Ruben, Athletico Paraneanse: The Argentine striker, on loan from Argentine pro club Rosario Central, has made pro stops around the globe, including River Plate, Villarreal, Dynamo Kyiv, and Tigres.

Here’s the complete rundown of the finals, dating back to the inaugural affair in 1960.