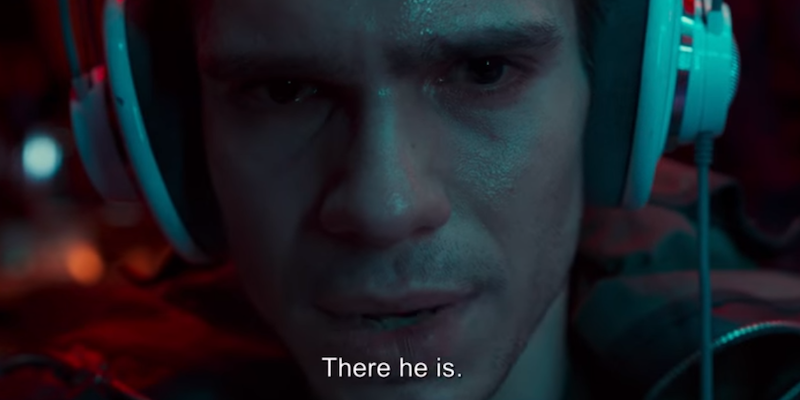 For when you realize 'The Hunt for Red October' isn't streaming.

When Americans think of French cinema, they think of ponderous philosophical cinematic meditations, often in black and white, often rife with ennui. There is barely an ounce of ennui to be found in The Wolf’s Call (Le Chant Du Loup), a naval submarine thriller that shows, for better or worse, that French cinema is capable of much more than what is contained within art house walls.

A throwback to the kind of military thriller they don’t make in Hollywood anymore.

The Wolf’s Call offers pulse-pounding action and military intrigue on a level you just don’t see from Hollywood filmmaking anymore. It is a well-constructed, if familiar and predictable, action film that will thrill Tom Clancy fans and habitual History Channel viewers.

The film stars François Civil as Chanteraide, a French submarine technician known for his “Golder Ear.” With just a few seconds of audio, he can detect the make, model, and most importantly, the nationality of another vessel. Chanteraide is a prodigy, and as with all cinematic prodigies, he has that dangerous mix of cockiness and aloofness that drives his superiors mad…until he inevitably earns their begrudging respect because he is just that damn good goddamn it.

We open with a tense naval skirmish that lasts about 10 minutes and unfolds so cleanly you could throw it into an introductory screenwriting textbook. Enemies are detected, but where and what exactly are they? Chanteraide has to find out. Time is of the essence. But, for the first time ever his Golden Ears are failing him. He can’t identify this submarine, and his inability to determine whether it is a friend, foe, or a sperm whale nearly gets his crew killed.

After the pulse-pounding near miss, we learn that Chanteraide is just one piece of a massive French naval machinery that has been forced into action by its global commitments. The skirmish was in Syria, which inflamed tensions with Russia, which led to Russian aggression in Finland, and now the crew is going to be taking command of a top-class nuclear submarine, the frontline in what could become total war. Oh, and you’d better believe things are going to escalate from there.

Chanteraide, of course, will join his crew, along with the perfect number of war-weary veterans who each receive a monologue about the tough reality of war and fresh-faced young idealists with very few lines. And, of course, he will become obsessed with redemption in the meantime. His Golden Ear has never failed him, and he’s going to risk his career and his wellbeing to figure out what went wrong. “The Wolf’s Call” is both the sonar call that indicates your sub has been detected and the obsessive focus that comes when your profession involves protecting dozens of men from certain death.

Chanteraide has heard the wolf’s call. Will it ruin him? In 1994 that idea would have been worth a $200 million budget.

The premise sounds like something out of that part of the ’90s when instead of superhero movies, Hollywood produced endless adaptations of Clancy novels and tirelessly tried to replicate the success of 1986’s Top Gun. Director Antonin Baudry has clearly learned the lessons of that bygone era. The film is tight but offers just the right amount of philosophical musing and character development to elevate it beyond a mere submarine shoot ‘em up. There’s even a love interest who Chanteraide takes to bed within minutes of meeting her who will offer subtle, but ultimately insignificant challenges to his patriarchal worldview.

While The Wolf’s Call is in no danger of winning the best foreign language film Oscar, it is no wonder Netflix opted to pick up American distribution rights for the film with an aggressive presale. Just as its American properties like Stranger Things and Always Be My Maybe evoke types of films that aren’t made anymore, The Wolf’s Call should bolster the streamer’s dwindling back catalog by offering something that a dad with a penchant for military films might enjoy. When he realizes, much to his dismay, that The Hunt for Red October is only available as a DVD rental, this will be more than worth settling for.

Before you recommend this film to the war nerd in your life, it does bear mentioning that the film’s $22 million budget pales in comparison to most American war thrillers. If it’s tense strategic maneuvering that they like, then great. But, no one should go into The Wolf’s Call expecting blockbuster-level explosions. That being said, anyone with even passing experience in film production will be impressed with what the production team is able to achieve on a modest action budget. Though the submarine action is contained the beginning and end of the film, both sequences punch above their weight.

The Wolf’s Call doesn’t exactly transcend its subject matter, and it isn’t intended to. Though there are moments where we get lines that are painfully French such as, “This is the military. Not art school,” and the characters smoke after sex, this film is as straightforward as anything Hollywood might produce. The villains are the villains that a red-blooded NATO ally might expect: Russia and various Middle Eastern belligerents. The heroes are generally loyal, white, Western military men. It bleeds red, white, and blue, just from a different flag. While the film is entertaining, there’s nothing new to see here. That status quo remains blissfully unchallenged.

If the idea of submarine warfare with a little international intrigue and romance mixed in is your idea of a good Wednesday night, you’ll enjoy The Wolf’s Call. If your genre tastes lie elsewhere, then there is no particular reason to heed this call unless your father-in-law comes over armed with a bottle of scotch and anecdotes about naval warship classes.