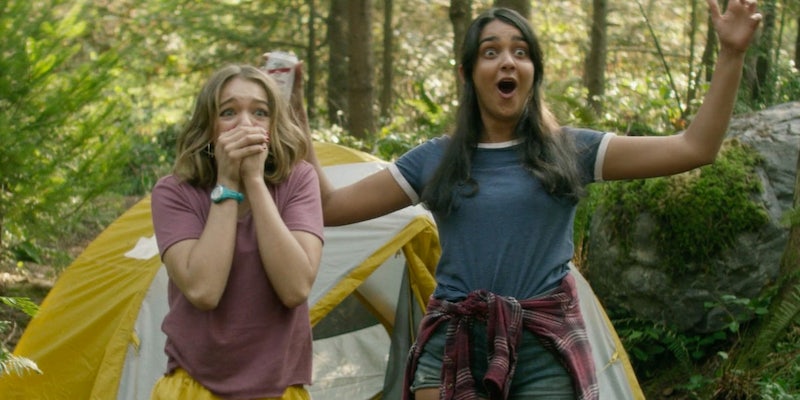 The comedy is funny despite its wildly sophomoric setup.

The Package is a movie about a teenager who cuts off his own penis. I wish there was a more delicate way to put this, but that’s what we’re dealing with.

A co-production between Ben Stiller’s Red Hour Productions and the Workaholics crew’s Mail Order Company, the film imitates that show’s model of “the grosser the better” comedy (the premise is practically ripped from an actual episode of the series). Following a group of high-school friends who go on a camping trip, the movie sets up a ticking clock when one of the youngsters, after drinking too much, accidentally commits the aforementioned act with a knife. The rest of the gang have to get the appendage to a hospital so it can be reattached in time.

Featuring an ensemble comprised of classic high-school movie archetypes, The Package stars Daniel Doheny as Sean, the cute-but-dorky leading man; Luke Spencer Roberts as Donnie, his pervy and sarcastic best friend; Sadie Calvano as Sarah, the sexy badass who can hold her own; Geraldine Viswanathan as Becky, Sean’s love interest and a cool girl with poor taste in men; and Eduardo Franco as Jeremy, Becky’s brother and the goofy oddball whose accident sets the whole story in motion.

Netflix has cast this thing well, and as was the case with Father of the Year, another one of the streaming platform’s recent lowbrow comedies, the young actors are by far the best part here. If there’s one standout, it’s Viswanathan, who shined as one of the three young leads in this Spring’s Blockers, a progressive, underrated comedy which deserved to do even better than it did. In The Package, she again proves that she’s got great comedic timing and real acting chops. The older actors among the supporting cast include Blake Anderson (probably the least busy of the Workaholics guys) as a methed-out hospital patient, the usually hilarious (but not so much here) Sugar Lyn Beard as his even more methed-out girlfriend, and Veep’s Mary Holland, who steals every scene she’s in as a caustic, acid-tongued nurse.

To say this movie has bad taste would be an insult to bad taste. I’ve never seen so many shots of a severed dick in a single film and I have no desire to see a film that gets this much mileage out of mutilated genitals ever again. But it’s not just the dick jokes which are over-the-top. You can see every bad joke this movie sets up a mile away, so much so that the few times it actually does become genuinely offensive, you almost miss it.

Normally, any film that involves showing an 11-year-old boy a severed penis would pretty much be an automatic zero-star rating from me. Yet despite The Package’s gratuitous and often needless raunchiness, I got a nostalgic twinge of pleasure watching this movie. I laughed out loud several times. The film reminded me of a time when titles like American Pie and Harold and Kumar Go to White Castle could prove legitimate hits at the box office, or at the very least, develop a second life on video and DVD. The Package suggests that the teen sex comedy isn’t dead.

Jake Szymanski, who directed The Package (the movie was written by relative newbies Kevin Burrows and Matt Mider), previously made the similarly immature but generally much better Mike and Dave Need Wedding Dates. I don’t know what it says that he followed up a major studio comedy with a typically unpolished Netflix movie, but I’m going to choose to look on the bright side. While The Package isn’t nearly the film something like Blockers or even Mike and Dave is, it’s amusing enough of a watch at home. This is Netflix’s sweet spot, especially when it comes to comedy—a genre which always is a gamble at the box office because of the relative lack of spectacle and international crossover appeal.

I can’t wholeheartedly recommend The Package, but I can’t say I didn’t enjoy it. I look forward to a time in American cinema where it is more socially acceptable to show a penis on-screen, just preferably one that is attached to a body.