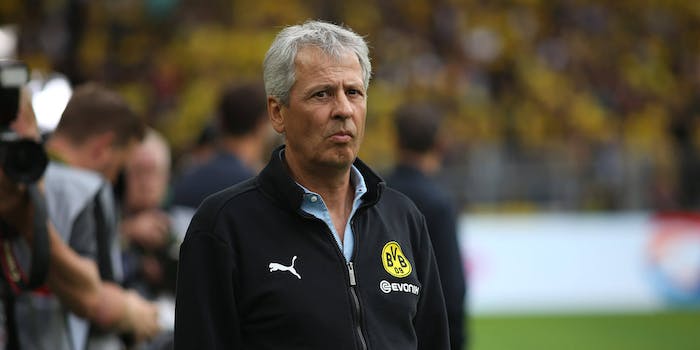 How to stream Dortmund vs. Paderborn live

Dortmund could use a win on Sunday to help keep its Champions League spot intact.

Here’s everything you need to stream Dortmund at Paderborn on Sunday.

Why are we all up in a lather over this game? Well, some might tell you that Bayern (obviously, not even part of this match) will win the title should Dortmund lose. The Bundesliga has seven games to play after this, and Bayern “only” has a ten-point lead over Dortmund following its win over Fortuna Dusseldorf. Math is not my strong point, but I do know 7 games x 3 points per game = 21.

In other words: We still won’t know at the end of this weekend who receives the big ugly plate that functions as the Bundesliga trophy.

However, there’s an argument to be made that Dortmund has already lost this season, just like RB Leipzig, just like Borussia Mönchengladbach—both also title contenders earlier in the year. They’re all still in a keen race, along with Bayer Leverkusen, for next season’s Champions League places. We may all need to accept Bayern Munich has a stranglehold on the Bundesliga title.

If Dortmund actually lose this game, the club will probably miss out on the title, but losing to Paderborn seems so unlikely that it would only occur to those in the midst of a Bundesliga fever dream. Paderborn hasn’t won a game in nine tries, and are dead last in the table. The most Paderborn can realistically hope for is to crawl up to 16th, which would allow them a playoff to fight for their Bundesliga place, as opposed to outright relegation.

This match will be shown on FS1 and Fox Deportes.

Dortmund was likely hoping for a surprise scalp against the Bundesliga leaders, given that almost anyone wants to see another champion than Bayern after the last seven seasons. But Der Klassiker offered few surprises. In fact, it only took one goal, from Joshua Kimmich, to seal Bayern’s win, and practically erase Dortmund’s title dreams.

On the opposite end of the table, we have Paderborn, dead last and having won just four games. However, the side has earned a point in each of its last three games, including a thrilling scoreless draw with Augsburg on Wednesday. Is Paderborn actually benefiting from the no-fans rule, caused by the great 2020 pandemic?

According to the DraftKings Sportsbook oddsmakers (as of May 30), Dortmund is, not surprisingly, the favorite.