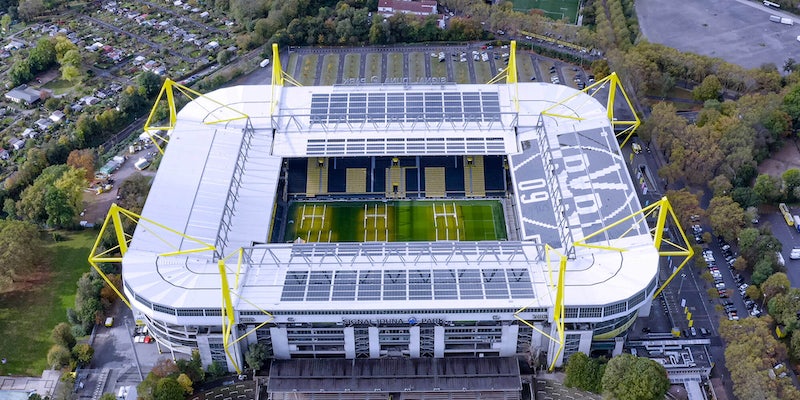 How to stream Borussia Dortmund vs. Hertha Berlin live

Dortmund's still trying to stay in the hunt for a title ... and its players look up for it of late.

Here’s everything you need to stream Dortmund at Hertha BSC on Saturday.

There’s not much to say about this game . . . except that if you like teams that score goals, this is a great match.

Dortmund is the big name here, with casual observers would think of maybe thinking of captain Marco Reus, Mario Götze, or Mats Hummels. But it’s the youngsters stealing the scene in Dortmund.

20-year-old Jadon Sancho, already on his way to be being a football god, already has 17 goals this season, and is second in the league in assists with 16. Erling Håland, just 19, is looking to challenge Sancho’s goal total with 10 in 11 appearances. We should also me Sntion third in number of goals scored, he’s also second in the league in assists. Thorgan Hazard, a summer acquisition, is third in assists with 13. It’s this sort of teamwork, alongside a quick and efficient press, that makes BVB quite fun to watch.

Americans showed an interest in Hertha Berlin when former USMNT manager Jurgen Klinsmann took over in late November, but he stayed only ten games. In Germany, they’re being closely observed these days, as they’re very close to a Europa League spot—just four points behind both Hoffenheim and Wolfsburg. Since Bruno Labbadia took over, Hertha has been excellent.

The team has scored 11 goals in 4 matches, and it’s awfully fun to watch. It’s a possession-oriented squad that doesn’t mind throwing out a foul every once in awhile, and loves to share out goals amongst the squad. It’ll be interesting to see the approach here: Either hang back and protect the goal because it’s BVB, or go all out in Herthastyle.

This match will be shown on FS2 and Fox Deportes.

Dortmund, rather unsurprisingly, fell 1-0 to the almighty Bayern in May’s Der Klassiker, the biggest game in German soccer. So—also unsurprisingly—BVB came back over the weekend and smashed poor Paderborn, who had done nothing at all except open its stadium gates and take its place at the bottom of the table.

Dortmund toyed with its prey for quite some time, but Paderborn failed to stop the onslaught in the second half, which began with a goal from Hazard. Sancho scored shortly thereafter and wound up with a hat trick. Achraf Hakimi and, perhaps most surprisingly, Marcel Schmeltzer, a defender who has played just five games this season, also got on the board. While Uwe Hünemeier got Paderborn on the board in the 72nd minute, Sancho’s second goal two minutes later cut off any hope the hosts may have had left.

Hertha surprised many in midweek by securing a 2-2 draw with RB Leipzig, a Champions League contender. Of course, it did involve a last minute penalty after Leipzig had been given a red card, but Hertha came out of the gate ready to play its game, and was first to score. Last week’s game was against Augsburg, but the 2-0 scoreline came as little surprise given Augsburg is merely concentrating on avoiding relegation.

According to the DraftKings Sportsbook oddsmakers (as of June 5), Dortmund is a favorite to win.