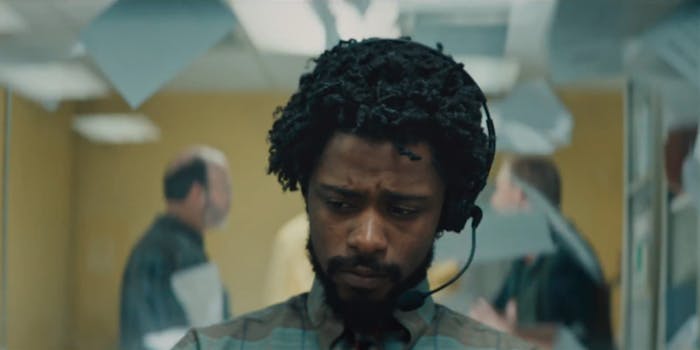 Get your fix with these new comedies.

2018 was a good year for comedies, with some surprise hits at the box office, HBO slam-dunks, and Netflix original movie titles that developed their own fandoms. It was also a year that saw a little more representation in the genre across the board.

Here are some of the best new comedies of 2018, and where you can stream (or rent) them.

A rare comedy where the parents are the idiots and the kids are the rational ones. Kay Cannon (Pitch Perfect) directs this ensemble comedy about three teenage friends set on losing their virginity on prom night and the parents—Leslie Mann, John Cena, and Ike Barinholtz—set on blocking them. It’s a one-crazy-nighter that gives way to something more thoughtful and affecting in regards to women’s sexuality, and the Mann/Cena/Barinholtz trifecta yields some big (and small) moments of comedy. —Audra Schroeder

2) The World Is Yours (Netflix)

The World Is Yours stars up-and-coming actor Karim Leklou (A Prophet, Heat Wave) as Fares, a staunchly beta do-boy in the Arab/North African crime cartel, which operates out of Parisian high-rise project housing. Even worse, he’s a mama’s boy to Danny (the legendary Isabelle Adjani). His partner in crime is the highly conspiratorial Henry (Vincent Cassel, in a hilarious and film fortifying role), who believes everyone is in on it. —Kahron Spearman

Sorry to Bother You deftly addresses issues of race, gender, and class with equal weight, carefully analyzing the way they play out in society, and offering solutions that take all three into account. Lakeith Stanfield plays Cassius “Cash” Green, a young Black man who is down on his luck and deep in debt. All of that changes when an older mentor at his new telemarketing job, Langston (Danny Glover), teaches him how to use his “white voice.” Langston tells Cassius that a white voice, “Sounds like you don’t have a care in the world. I got my bills paid. I’m going to jump in my Ferrari after this call.” He continues, “It’s not really a white voice. It’s what they think they are supposed to sound like.” —Brenden Gallagher

When it was released in early 2018, Game Night might have confused some people. The comedy boasts Jason Bateman and Rachel McAdams as a couple obsessed with game nights and yet another night-gone-wrong premise. But once you’re inside, Game Night messes with all the familiar genre tropes. Co-directed by John Francis Daley and Jonathan Goldstein (who also wrote the less well-received Horrible Bosses), the film’s ensemble cast is essential (Sharon Horgan and Jesse Plemons steal show), its jokes genuinely funny, and its plot twists aren’t dumbed down. —Audra Schroeder

Based on Kevin Kwan’s novel of the same name, Crazy Rich Asians tells the story of Rachel Chu (Constance Wu), a smart, young economics professor at New York University who is dating Nick Young (Henry Golding), a man she later learns is essentially the Asian Prince Harry. It’s a charming film that manages to strike the perfect balance of romance, comedy, drama, and absurdity to show viewers that stories with non-white actors are just as funny, beautiful, and heart-wrenching. Forget being an Asian American film or a rom-com—it’s just a good film. —Kristina Nguyen

6) A Futile and Stupid Gesture (Netflix)

A Futile and Stupid Gesture, Netflix’s feature film adaptation of Josh Karp’s 2006 book of the same name, is an exploration of the creation of humor mag National Lampoon and its odd-couple co-founders, Henry Beard (Domhnall Gleeson) and Doug Kenney (Will Forte). It’s removed enough from its 1970s origins to offer new insight into its generational influence—and it also recontextualizes satire in an era littered with “fake news.” —Audra Schroeder

Paddington 2 was… good? That seems to be the sentiment around this sequel, at least according to its 100 percent score on Rotten Tomatoes. In this installment, the sweet brown bear (voiced by Ben Whishaw) is now living with the Browns (Sally Hawkins and Hugh Bonneville) and making friends everywhere he goes, but Hugh Grant plays Paddington’s nemesis with gusto. Even when Paddington ends up in jail after being framed for theft (yes, this is a family-friendly movie) the vibe stays positive. Paddington is our guiding light in a dark world, apparently. —Audra Schroeder

Set It Up stars Zoey Deutch and Glen Powell playing stressed-out assistants seeking to hitch their powerful bosses, ably played by Taye Diggs and Lucy Liu. Harper (Deutch) works for fearless sports editor Kirsten (Liu) while slowly drowning her journalist dreams. Charlie (Powell) waits on irritable businessman Rick (Diggs) hand and foot, leaving no time to consider his life or tend to his wasting relationship with status-chasing model girlfriend Suze (Joan Smalls). The assistants soon bring their alpha bosses together, and of course, this means they find themselves predictably closer as well. Set It Up doesn’t break any new ground, but its stars’ chemistry and diverse casting make it a win. —Kahron Spearman

Comedian and musician Bo Burnham’s directorial debut feels a bit autobiographical: He got his start on YouTube and Vine, and his alter ego here is 13-year-old Kayla (Elsie Fisher), who inhabits the awkward space between middle and high school. Kayla doesn’t have a plucky best friend and doesn’t focus too much on her unattainable crush; Eighth Grade is about her trying on different personas, navigating social media and social interaction, dealing with mortification and self-doubt, even as she tries to put an authentic version of herself out there. Fisher is great and a pivotal pool party scene is one of the best depictions of middle school anxiety put to film this decade. —Audra Schroeder

10) To All the Boys I’ve Loved Before (Netflix)

To All the Boys I’ve Loved Before has become a full–blown Internet sensation since it was released in August. And to be honest, it probably should be. Not only is it a funny, smart rom-com with positive representation in the vein of Crazy Rich Asians and Netflix’s other recent additions to the genre, it’s also a savvy update on the classic template put forth by John Hughes. The film is set in motion when the private letters of high-schooler Lara Jean Covey (Lana Condor) are unleashed upon the world, and sent to all her secret crushes. To cover her tracks, she makes a pact with hunky lacrosse player and new Internet boyfriend Peter Kavinsky (Noah Centineo) designed to to help maintain both of their social standings. As you might’ve guessed, things don’t go as planned. Cue audience swooning. —Chris Osterndorf

Guy Amir and Hanan Savyon, an already-flourishing Israeli TV duo, make the great leap forward onto the silver screen with the serviceable and ultimately rewarding Maktub, a dark hybrid comedy about two low-level mobsters thrust from their thug roles into living guardian angels. Steve (Savyon) and Chuma (Amir) are mob collectors, who as maktub (or fate) would have it, are the only survivors of a terrorist attack after they go into a restaurant bathroom to settle a bet about whether a shirt stain consisted of pomegranate concentrate or blood from a chef they’d just beaten up for money. Maktub‘s leads end up servicing the supporting characters more often than they should, but the plot ends bind together well, mitigating any character shortcomings. Maktub finishes sweet, with Amir and Savyon conclusively nailing their compound of playfulness and gallows humor. —Kahron Spearman

The film is anchored by Kristen Bell and Kelsey Grammer as the estranged daughter-daddy duo of Rachel and Harry. Bell plays Rachel with the same hardened, world-weary veneer she brought to Veronica Mars. Rachel is focused and strong, and she’s a workaholic. So her moments of vulnerability stand out. Grammer is a nice surprise. Or rather, Harry is a surprise. You’d expect him to be gruff and hard to get along with. But Grammer gives Harry a warmth that is laced with sadness. Despite being apart for so long, the echoes between Rachel and Harry are obvious. —Eddie Strait