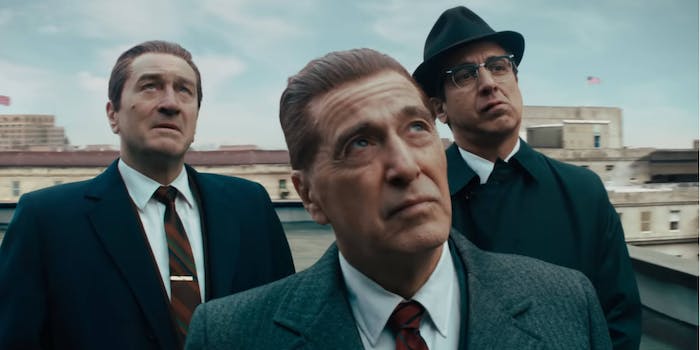 Here’s everything to look forward to from Netflix in 2019

Netflix unleashed a lot of new movies and series on its audience in 2018, and 2019 promises to be deliver even more, with the streaming service set to release new seasons of shows like Stranger Things and 13 Reasons Why, as well as anticipated reboots (The Dark Crystal prequel), series (Ava DuVernay’s When They See Us), and standup specials (Billy Eichner, Wanda Sykes). We can only hope that Netflix new releases in 2019 are even better. Here’s what we know about the Netflix release dates in 2019 so far.

Mike Birbiglia: The New One (standup)

Martin Scorsese brings in De Niro, Pacino, and Pesci for an epic look at organized crime.

The investigative series looks at consumer corruption and fraud.

Romany Malco stars as an out-of-work DJ trying to make the holidays special for his kids.

John Crist: I Ain’t Prayin’ For That (standup)

A dad (Dennis Quaid) tries to keep the holidays under control when his daughter brings her boyfriend home.

I Lost My Body (film)

A severed hand tries to find its way back to its owner in this animated French film.

The Movies That Made Us (series)

A look back at some of the most influential movies of a generation.

Haddish celebrates her roots with her first Netflix special.

The First Temptation of Christ (film)

A hip-hop dancer falls for a ballerina.

The Road to Love (series)

A young woman must prove herself as a trucker.

It’s time for another royal baby.

A woman seeks out a boyfriend to bring home for Christmas.

A disease turns people into vampires, and friends against each other.

The sketch comedy continues with this six-episode debut from Astronomy Club.

There’s a new baby, and lots of help.

Makeup artists battle for a chance to make it big.

The daughter of a triad boss tries to make her own way as a bodyguard.

A nurse relocates to a small town in Northern California.

The sisters prep their act for the Christmas pageant.

Wolf is back with a new standup special.

The comedian gets his dad in the holiday spirit.

The Daily Show‘s Chieng shares his views on America.

A look at the intersecting lives and loves of a group of people in L.A.

Amateur sleuths try to track down a man who posts animal-abuse videos online.

After the Raid (documentary)

A look at the fallout after an immigration raid in a small Tennessee town.

Henry Cavill becomes monster hunter Geralt of Rivia in this adaptation of the fantasy series.

The comedian brings back the kid-centric variety show, with guests like Natasha Lyonne and David Byrne.

Joe is back and he’s moved to L.A.

An actor becomes fixated on a dating app.

The Bonfire of Destiny (series)

Set in 1897 Paris, three women navigate the aftermath of a fire.

The comedian offers a look at his personal life.

A painter living in Istanbul discovers an ancient link to her past.

A young man becomes a superhero.