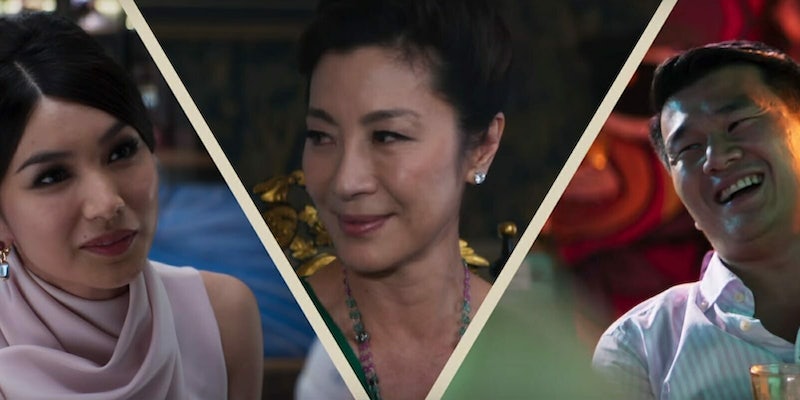 The case for ‘Crazy Rich Asians’

The trending rom-com rewrites the rules.

Like Douglas Kim, Jiayang Fan, and all the other Asian writers who felt the weight of the world in the movie ticket they held, essays and deadlines dancing in their head, I too felt a sense of dread entering the theater to see Crazy Rich Asians. But like them, I found something special instead.

Based on Kevin Kwan’s novel of the same name, Crazy Rich Asians tells the story of Rachel Chu (Constance Wu), a smart, young economics professor at New York University who is dating Nick Young (Henry Golding), a man she later learns is essentially the Asian Prince Harry. Nearing the anniversary of their relationship, he invites her to his best friend Colin Khoo’s (Nick Pang) wedding in Singapore to meet his friends and family. Rachel is quickly thrown headfirst into Nick’s glamorous world, the likes of which include luxury mansions, obnoxious fuerdai, and his stern, but caring mother Eleanor (Michelle Yeoh), who makes her disapproval for Rachel clear.

Crazy Rich Asians is a charming film that manages to strike the perfect balance of romance, comedy, drama, and absurdity to show viewers that stories with non-white actors are just as funny, beautiful, and heart-wrenching. Forget being an Asian American film or a rom-com—it’s just a good film.

Sure, it’s predictable. We’ve seen the Cinderella story of the dashingly handsome young man with a million-dollar secret falling in love with the normal, yet charming and passionate ingenue more times than we can count. And sure, there are some obvious problems with it. Why does the first contemporary film with all-Asian American leads have to center around an almost disgusting (though not unrealistic) glorification of wealth? Why doesn’t the film show more of Singapore’s darker-skinned population? Why, oh why, does Awkwafina have a “blaccent”?

But in terms of genre, Crazy Rich Asians does more than well. According to the Ringer, a romantic comedy requires three simple things: a protagonist who is looking for love, a conflict that pushes the couple apart, and a grand gesture. Crazy Rich Asians has all that and some Jimmy Choos and combines it with a spot-on cultural specificity. Not only is the film a beacon of hope for Asian Americans in Hollywood, but it’s also breathing new life into a dying genre. No matter how many budget rom-coms Amazon and Netflix dump onto viewers, the film proves that nothing brings to life a love story like a grand production. Maybe that’s why director John M. Chu said no to streaming.

This isn’t a movie made by us, for us. It’s a movie made by us, for us, and for a lot of other people too. Crazy Rich Asians doesn’t claim to encapsulate the diversity of Asian American life or Asian culture (though we can all laugh at the lactose intolerance and Tupperware jokes). It’s a door opener, not a doorbuster. With all of its shimmer and shine, Crazy Rich Asians brings the escapist fantasy of a rom-com to Asian Americans.

That’s not to say the criticisms aren’t valid. At a time when Asians have a lower homeownership rate than the American public overall, and income inequality in the United States is now greatest among Asians, it’s important for us to keep those stories alive. (If anything, Crazy Rich Asians has served as a conversation starter for these issues.) But at the same time, the pressure placed on it is unfair. Why is it up to this one movie to solve all of our problems?

“I know CRA won’t represent every Asian American,” Constance Wu tweeted on July 31. “So for those of you who don’t feel seen, I hope there is a story you find soon that does represent you. I am rooting for you.”

The Asian American community has responded. The #GoldOpen movement on Twitter bought out theaters nationwide to “show that representation means business.” It’s projected to reach $30 million at the box office this weekend, no small feat in the age of Marvel blockbusters.

At the heart of the story, however, beyond the Marchesa gowns and the ruby earrings, there is something that speaks to every Asian American. Crazy Rich Asians is about sacrifice and duty to our family. It’s about our emotionally wrought relationship to tradition, and culture and the foreignness we feel in both America and our motherland. It’s about feeling like you’re not good enough and trying anyway—something that the Crazy Rich Asians cast and crew was more than aware of while making the film. And despite all of its flaws and shortcomings, it’s hard to convey the overwhelming sense of relief you feel when a movie that you’re rooting for, that means so much to the Asian American community, sticks the landing.