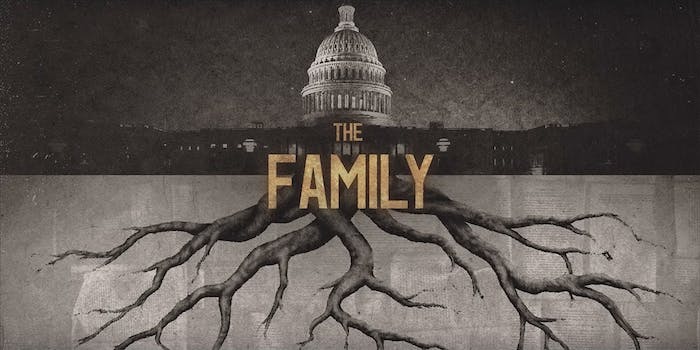 It's not about faith, it's about power, the doc argues.

In Netflix docuseries The Family, director Jesse Moss delves into the once-secretive world of the Fellowship Foundation—also known as the Family—that is a Christian organization with a devotion to using politicians to evangelize the world.

The docuseries is based on the research and writing of Jeff Sharlet, a religious scholar who stumbled upon the Family by chance in 2002, when he spent time living at a remote compound in Arlington, Virginia, called Ivanwald. The “brothers” who lived at Ivanwald were young men and new recruits for the Fellowship—who believed they were followers of Jesus and doing God’s work by serving His elected leaders: politicians. Sharlet chronicled his time at Ivanwald and information he discovered via two books, The Family and C-Street.

Led by the late Doug Coe—popularly referred to as the “Stealth Billy Graham”—the Fellowship Foundation fundamentally operates as an invisible theocracy in Washington, D.C., recruiting politicians to join the family and using influence to affect legislation. It’s remained mostly behind the scenes, although you’ve probably heard of its biggest annual gathering: the National Prayer Breakfast. On the surface, the Fellowship doesn’t seem that off from any other evangelical movement; its newly made website touts a belief in following Jesus’ two great commandments—to first love God and then your neighbor—and the organization seems merely devoted to fulfilling Jesus’ Great Commission to share the gospel to the nations.

The Family, however, unpacks how exactly the Fellowship derives from scripture and turns into yet another political entity abusing faith to obtain power. Firstly, the Fellowship waters down the Bible and distributes its own book that includes just the four gospels and the book of Acts. Secondly, the docuseries argues that the Fellowship ascribes to the belief that politicians were not just elected by U.S. citizens, but are imperfect vessels chosen by God to lead. This belief—along with the idea that when you sin, you only need to repent to be forgiven—gives elected politicians a way to avoid accountability when they stumble in office and uplifts the belief that God only chooses a select few, not everyone. The organization goes as far as to recall on King David and how even after he raped Bathsheba and ensured the death of her husband, God allowed him to remain king.

Cumulatively around five hours long, The Family attempts to unpack and scrutinize over 80 years of activity conducted by the Fellowship Foundation and its constituents. Its five episodes each tackle a separate topic. Episode one explores Sharlet’s experience at Ivanwald; episode two uncovers the Fellowship’s ties to C-Street and how the organization subsidized housing for Congress members; episode three and four show how the Fellowship spreads its influence to other nations; and episode five argues that the election of President Donald Trump is a dream come true for the organization.

The Family attempts to unpack a lot in a short period of time and often gets lost in the details. Because of Moss’ decision to pursue a wide, holistic angle of the Fellowship—chronicling everything from Ivanwald to C-Street, to missional work abroad to its small groups all around the U.S.—the series loses steam halfway through and feels exhaustive. The docuseries might have been easier to digest if Moss had either taken a more traditional approach to storytelling or had focused in on just part of the history.

The series begins with a rocky start in the first episode when Moss and his producers elect to supplement a lack of footage at Ivanwald with a dramatized re-enactment. On top of the fact that the dramatization and acknowledgment that dialogue was changed hurts the docuseries’ legitimacy, it doesn’t help that the acting is sub-par and the dialogue is cheesy. Thankfully, the docuseries throws out the re-enactment method for the rest of the episodes and instead focuses on the use of archival video and images—as well as interviews with members of the Fellowship and its critics.

The entire docuseries seems to build up to its messaging in the final episode, which focuses primarily on the election of Trump. The president was elected by a record-high number of evangelical Christians in 2016, despite his lack of church attendance and general lack of knowledge about the Christian faith. Critics of the president have wondered how a faith with a leader like Jesus—a refugee who fought against authoritarianism and advocated for the marginalized—could vote for Trump.

But The Family’s exploration of the Fellowship and its devotion to lifting up “imperfect vessels” to complete “God’s perfect work” in D.C. makes it very clear how the organization—which already lacks a foundation in scriptural truth—sees how its new “Wolf King” can advocate for the fundamentalist right without being a devout believer at all.