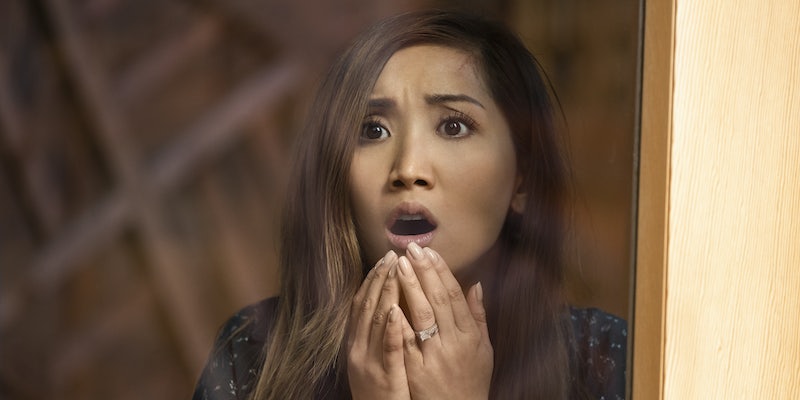 Secret Obsession is a soulless lump of generic mush that aspires to the cheese level of a Lifetime original joint but doesn’t come anywhere close. Instead, Secret Obsession unfolds with all the suspense of someone casually flipping through a magazine. It’s flimsy, disposable, and worst of all, brutally boring. Being bad isn’t always an impediment to being entertaining, but being boring is a deathblow.

RELEASE DATE: 7/19/2019
DIRECTOR: Peter Sullivan
STREAMING: Netflix
A woman regains consciousness after getting hit by a car only to realize the man claiming to be her husband may be up to something sinister.

The movie’s fate is sealed from the beginning, kicking off in media res with Jennifer (Brenda Song) hiding from a mysterious assailant. She’s on the cusp of getting away and sparing us the rest of the film when she’s blindsided by a car, halting her sprint to freedom. Jennifer survives and eventually wakes up in a hospital with her meticulously groomed husband, Russell (Mike Vogel), by her side. Between her injured leg and memory loss, Jennifer is physically and mentally hobbled. She has no choice but to return home with the man she doesn’t remember marrying. That he is a malevolent psychopath hardly counts as a spoiler; his dark side is obvious from the second he steps into frame.

The bulk of Secret Obsession takes place in an isolated house in the woods. I know what you’re thinking. Yes, the closest neighbors are a mile away. Obviously, cell phones don’t work out here. We’re stuck in the middle of nowhere, waiting for Jennifer to catch up to the rest of us. The script, credited to Peter Sullivan (who also directs) and Kraig Wenman, makes this wait interminable. You can see the film going for a slow burn approach, but between the unimaginative filmmaking and a limp TV-14 rating, it feels like watching someone try to light a wet candle.

Song does what she can to make viewers care about Jennifer, but she simply has nothing to work with. The only reason to root for her is because her escape will end the movie. As Russell, Vogel basically plays an animated mannequin. His character comprises solely toxic traits, and he’s unremarkable in every way except one: His perfectly styled hair never moves.

Dennis Haysbert lends the film more credence than it deserves as Frank Page, the local detective investigating Jennifer’s accident who’s haunted by the disappearance (and presumed death) of his daughter. It’s an emotional hook the film barely tries to sell, and it’s kind of insulting. The script uses Page’s family trauma as a shortcut for character development. It feels cheap, which adequately sums up Secret Obsession.

As a thriller, Secret Obsession is inept. It doesn’t bother to hide clues or surprises. As cheap, throwaway entertainment, it’s still inept. It’s not even so bad it’s funny. Secret Obsession is just bad-bad, and it’s maddening. Roger Ebert once said, “No good movie is too long, and no bad movie is short enough.” Secret Obsession somehow bends time to cram five hours’ worth of tedium into its 97-minute runtime.

In another world, Secret Obsession could have been a campy romp; I wish I lived in that world. Clearly, you should stay far away from this movie. It will almost certainly pop up on your Netflix homepage, and take heed—its stench is powerful. If you want a gripping thriller about a woman trapped in a house with an evil man, check out Hulu’s Into the Dark: Flesh & Blood. That movie at least makes an effort. Secret Obsession is content to be a generic thriller, so we should let it fulfill its destiny: to languish in the dark, forgotten corners of Netflix’s digital archive.