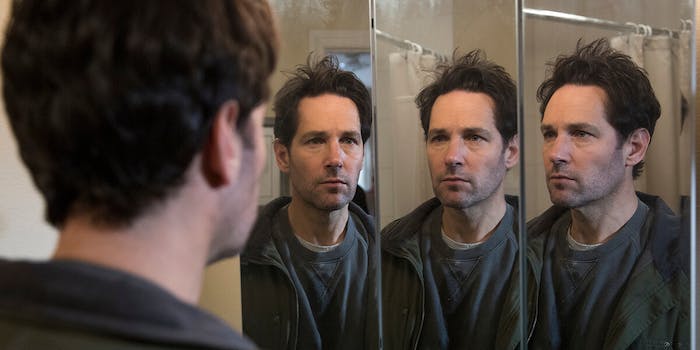 It's a smart TV comedy drenched in existentialism.

In Netflix’s original series Living With Yourself, Paul Rudd co-stars—with himself.

In the eight-episode series, Rudd plays a man in the midst of a midlife crisis who unknowingly clones himself and meets who he would be if he was the “better” version of himself. Created and written by The Daily Show producer Timothy Greenberg, the TV series explores humanity and morality through a comedic yet existential lens.

In the film, Miles Elliott (Paul Rudd) is a man struggling to keep both his career and marriage afloat. He’s depressed. When a fellow co-worker (Desmin Borges) recommends he check out an invite-only spa to revitalize him, he finds himself spending a cool $50,000 to feel like a new man. Instead, the spa clones his DNA and manufactures a new, more improved Miles. New Miles is full of ideas at work, has a revitalized adoration for his wife Kate (Aisling Bea), and even makes time to visit his sister (Alia Shawkat). But there can only be one Miles out in the world and the two must fight to finish over a life they both feel entitled to live.

Each episode is told from a different perspective—either old Miles, new Miles, or Kate. There is a minor overlap of what plot is told in each episode that reveals missing pieces. The decision to shift perspective works well for the series. It feels imperative. Without the shift in storytelling, both versions of Miles would appear extremely unlikable.

There’s no doubt that Living with Yourself is the Paul Rudd show. Thankfully, Rudd carries the TV series seamlessly. His acting is great, too. Old Miles and new Miles are so different, it doesn’t even seem like the same actor is portraying them. In Living with Yourself, Rudd showcases his versatility and multi-faceted acting skills.

Rudd isn’t entirely alone, either. An all-star supporting cast backs him up. Industry veterans Bea, Shawkat, and Borges each play their parts effectively. Bea, in particular, makes a compelling character who must choose between her real husband—who’s been through it all with her—or a clone of him who doesn’t carry any baggage. If the series is greenlit for the second season it clearly sets up in the end, it will be interesting to see her character grow.

Living With Yourself leads viewers to tackle existential questions throughout the series, making it more than just comedic. The series ponders what makes people the “best” versions of themselves. Is it a good-natured, high-energy, productive version of yourself? Or is the version of you that actively carries your lived experience a more dimensional, full person worth loving, flaws and all? Watching Living With Yourself makes its argument for the latter—and watching it just might make you appreciate your tired, jaded, imperfect self a little bit more.