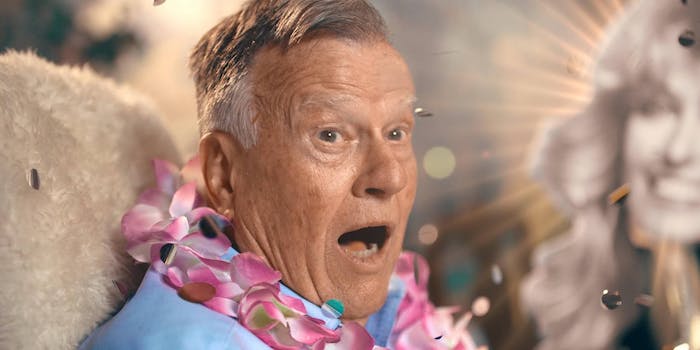 Dick Johnson Is Dead is an absolute gift. On the surface, it’s a deeply personal, incredibly funny, and surreal thought experiment as director Kirsten Johnson (Cameraperson), along with her father Dick, gleefully envision all of the ways he could eventually die one day; Dick is 84 when they begin filming and well, he isn’t getting any younger. We watch Dick Johnson die over and over again throughout the documentary with fascination and hints of glee, each death complete with high levels of absurdity once we’re let in on the joke.

RELEASE DATE: Summer 2020
DIRECTOR: Kirsten Johnson
STREAMING: Netflix
Director Kristen Johnson crafts a series of surreal yet realistic scenarios in which she kills her father before bringing him back to life. Envisioned as a way to make him live forever as he nears the end of his life, it’s something that becomes even more meaningful after he’s diagnosed with dementia.

It’s also a profoundly clear-eyed confrontation of death itself as Kirsten and Dick are really left to reckon with his impending end, one that they’ll never be able to script out no matter how many details they might know in advance. Even when the cameras aren’t rolling, death is imminent, and not in the general sense that death will come for us all one day. It’s a beautifully unique view into death itself, but amid Dick Johnson Is Dead’s unconventional filmmaking is a universal story about the joy of celebrating what you have in the here and now and the dread of having to say goodbye to a loved one. It’s the kind of living document that you wish you could for your own loved ones.

Kirsten’s approach to making her father live forever—killing him and bringing him back to life over and over again through the magic of cinema—is, at best, wildly eclectic. But it never feels exploitive because from the very first moment of Dick Johnson Is Dead, Dick is in on the game, and so are we. The cameras are rolling as Kirsten and Dick interview the stuntmen who will eventually play her father, some of whom observe and learn to imitate his walk; oftentimes, Dick hams it up for the camera and offers a dose of incredibly dark gallows humor with a smile. “You have permission to euthanize me,” Dick tells Kirsten at one point later in the documentary, laughing. “…but pass it by me before you do it.”

After each scene, whether it’s an air conditioner falling on his head, falling down a flight of stairs, getting hit by a car, or even a nail that accidentally ends up in his neck, the camera zooms out to reveal how it’s shot; we see both Dick and Kirsten observing filming (or Dick getting back up, clearly unharmed). Kirsten, throughout all of it, is both documentarian and subject, voicing her own feelings about what’s happening via a voiceover she records inside her own closet. Oftentimes, she’ll place the camera on the ground, so while you might hear a touching scene between her and her father as she tries to comfort him, you might not see it; he takes precedence over the documentary itself.

Once you learn why Kirsten is so keen on capturing her father’s very essence on film, those deaths (and their imagining of the afterlife) take on another level of poignancy. Dick has started to lose his memory recently, so he packs up his house, sells it, and moves from Seattle to New York to live with Kirsten in her cramped, one-bedroom apartment. It’s a visceral gut-punch, the kind that lands even harder if you’ve lost a parent and/or lost a loved one to dementia or Alzheimer’s. The latter can be especially crushing because it’s not just the death itself: It’s a million little deaths and stabs of guilt slowly drawn out and scattered across several months or years as everyone involved is powerless to stop it.

Dick and Kirsten both view his dementia diagnosis with a certain amount of clarity. Dick spent most of his life working as a psychiatrist, so he knows how the mind works, but he also lost his wife to the same disease that will take him one day. He and Kirsten have both already witnessed what will eventually happen to him. To be sure, there is a sort of melancholy undertone underlying every subsequent death scene that plays out once the stakes are relayed; just about everyone is grieving well before he dies. And there is also a subtle tonal shift as Dick’s disease gets progressively worse and he wakes up in the middle of the night, thinking he has a patient to attend to.

Dick’s guilt, insecurities, and fears are laid bare, but because of the love and care he and his daughter have for each other that’s so wonderfully depicted on-screen, it never feels like it’s going too far, though Kirsten admits that the line does get blurry. When the disease advances, Kirsten thrusts us into Dick’s mindset as she tries to capture how he’s feeling after he has a bad reaction to an experience he faced.

They imagine what will happen afterward from a funeral—the grief tangible on the faces of his loved ones—and create their own technicolor dreamscape of what heaven will look like complete with a light blue background, sparkly confetti, and dancers wearing giant paper faces of his wife; Dick, who was born without toes, even gets a new pair of feet from someone dressed as Jesus. It’s a lovely sort of rendering, one that’s partially influenced by his own religious upbringing as a Seventh Day Adventist. But it also doesn’t shy away from its own grim reality, either.

Throughout it, there’s an air of acceptance to what Dick and Kirsten cannot change, but that doesn’t stop them from pushing the bounds of what they can play around with or envision. Dick Johnson is going to die one day, but he’ll also live forever; Dick Johnson Is Dead made sure of that.

Dick Johnson Is Dead premiered at the Sundance Film Festival.