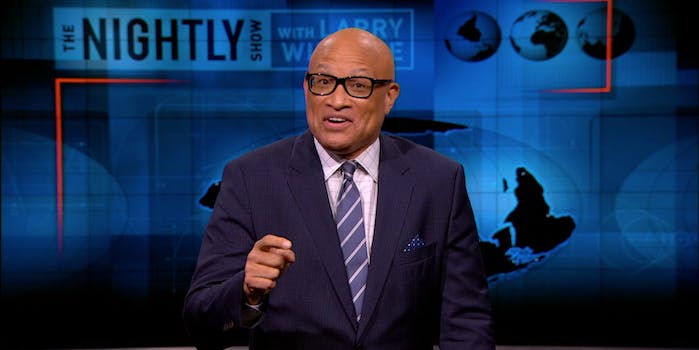 In Larry Wilmore’s first episode of The Nightly Show 20 months ago, he promised to “keep it 100 percent real” with his audience. And he did all the way to the end in a final episode Thursday filled with tributes, shenanigans, and a look at the kind of legacy Wilmore would leave.

In the midst of the late-night reshuffling we’ve witnessed over the past two-and-a-half years, we’ve watched a lot of exits. Jay Leno left The Tonight Show for the second time. David Letterman and Jon Stewart retired from television. Jimmy Fallon and Stephen Colbert shuffled to take over someone else’s mantle. Craig Ferguson and Chelsea Handler chose not to renew their contracts—on their own terms. And Arsenio Hall’s resurgence into late-night burned out fast. But Comedy Central canceling The Nightly Show after two seasons—while not entirely unexpected—stunned the comedy world.

It was a business decision as contract renewals approached, and Comedy Central said that The Nightly Show failed to resonate “in terms of our fans engaging with the show with consuming or sharing content or having a dialogue about it on social platforms.” No one was more surprised than Wilmore himself, who thought he would’ve at least been able to finish the election season before being canceled and recalled that “it felt like we were a little forgotten” when Comedy Central put all its promotion in Trevor Noah’s Daily Show last year in a recent New York Times interview.

But when it came to his final episode, Wilmore credited Comedy Central with giving him the opportunity in the first place to create a show that gave voices to those who didn’t have them. It was the right show, at the wrong time.

Like many final episodes in the past few years, Wilmore and his staff attempted to do a normal show because after all, the show must go on. But his correspondents have checked out, gotten together to solve the “Will they or won’t they” conundrum, and Wilmore has plenty of booze to drink from his fellow late-night hosts—except for Noah, who sent over baked goods instead.

Most of the show was a celebration of what The Nightly Show was able to accomplish in the time it was on TV, especially in a landscape when late-night—both in front of and behind the camera—was dominated mostly by white men. Wilmore hired a diverse and inclusive staff to create a show that challenged viewers’ mindsets and biases and presented captivating TV (even if it wasn’t always watched or wasn’t always easy to access), and Jon Stewart was chief to applaud him for it.

Stewart made a heartfelt tribute to Wilmore, praising what he was able to do with what he had.

“You gave voice to underserved voices in the media arena, and you did it… It was a show that was raw and poignant and funny and smart and all of those things,” Stewart said. “And you did it from scratch.”

Taking a shot at Comedy Central’s comments about Wilmore not resonating, Stewart argued that he did—and he will “in a way that you don’t realize yet and won’t reveal itself for years to come.”

After thanking everyone who made The Nightly Show possible, Wilmore ended his final show by addressing the most commonly asked question his audience asked him over the past 20 months: Why is his world map upside down?

Rather poignantly, Wilmore explained it was about changing the way we see things—we as a culture believe that the world is one way but it can be seen in any kind of way from space—and on The Nightly Show they aimed to “see the world in a way that may not make everyone comfortable” with people whose viewpoints aren’t often heard on TV. It’s a fitting metaphor for The Nightly Show, and one that succeeded—even if it’s not in the way Comedy Central had hoped.

Keeping it 100 until the very end, Wilmore had one more thing to say: “I’m not done yet.”

We can’t wait to see what he does next.