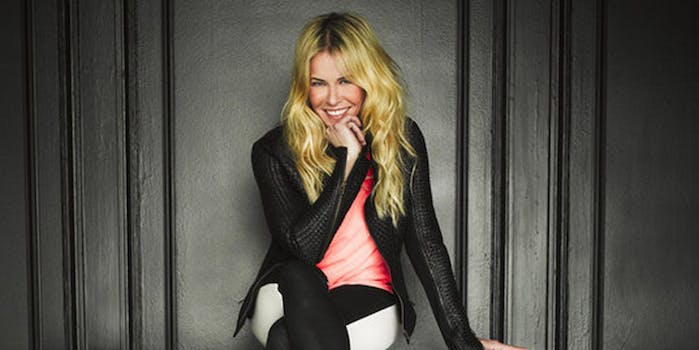 On the Aug. 26 final installment of her E! talk show, Chelsea Lately, Chelsea Handler dug deep to end her run in the least tasteful and clever fashion possible. Two unrelated skits/gags/tributes proved that Handler either needs better writers, more powerful meds, or both. Netflix fans be warned: Handler might revel in the idea she is an iconic loose cannon, but her misfires far outnumber her infrequent snippets of humor.

As they say in the newsroom, let’s go to the videotape.

The sight of a pixelated naked Handler in the shower bantering with Ellen DeGeneres is neither titillating nor particular funny. Handler attempts to set the Guinness record for the most times she can blurt out the word “lesbian” in a painful three-and-a-half-minute clip. The punchline of the yuck-free gag is that Ellen wants to know why Handler never had her as a guest on Lately, with DeGeneres appearing uncomfortable with the dialogue, appearing as if she was at the losing end of a really bad wager. Ellen even jokingly (maybe) asked Handler whether she was on some sort of medication. This nasty piece of video ends when her sidekick, Chuy Bravo, appears (also nude) on screen, somewhat baffled that the show was ending. (Obviously, the video is NSFW.)

Audiences did get a hint that Handler was likely to appear sans apparel at some point on her last show. Two weeks ago, she posted a fetching, semi-nude picture on Instagram, saying that she was a Kardashian. If only her dare to go bare had ended there.

Coming up with the least original way to bring Lately to a close, Handler is surrounded by a gaggle of A- and B-listers who join her in an off-key, reworked version of “We Are the World.” The musical exit starts off funny enough with Gwen Stefani poking at her own Emmy malaprop (she mispronounced Stephen Colbert’s name) by calling her “good friend” Chelsea Hammer. Sadly, it goes downhill from there. It is fun to identify the members of the chorus, but even Dave Grohl cannot save this mess.