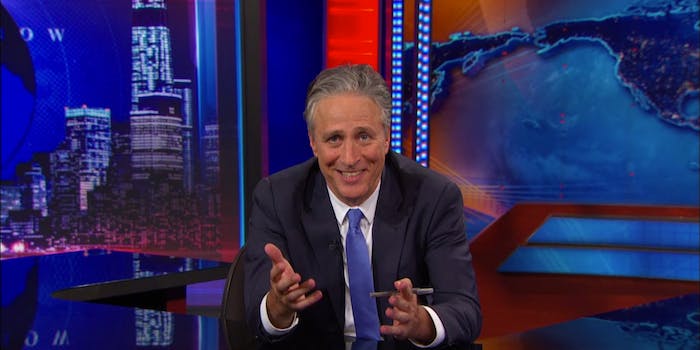 ‘Here it is—my Moment of Zen.’

Jon Stewart took one last bow (and attempted to take an Irish exit) in an oversized final episode of The Daily Show full of laughs, tears, Bruce Springsteen and other nods to his Jersey roots, and nearly too many cameos to count.

As the fifth late-night host to leave his chair in nearly two years, Stewart had a tough act to follow. Jay Leno, Stephen Colbert, Craig Ferguson, and David Letterman each helped define what makes a late-night finale: it’s full of star-studded tributes, plenty of self-deprecation, extreme cases of wackiness and irony, and a heartfelt thanks to the crew, the audience, and the host’s family. The laughs and tears were infectious.

Stewart’s departure comes at a time when America has never needed him more—although there would never really be a great time for his departure. The Daily Show taped on Thursday afternoon, but as it began airing, the first 2016 GOP presidential debate was just winding down. We’d do almost anything to see Stewart do one last show where he “eviscerated” Donald Trump and the other Republican presidential candidates one last time.

To start the final episode, the remaining Daily Show correspondents tried to cover this event that, at the time of taping had yet to occur. Jordan Klepper, Jessica Williams, and Hasan Minhaj started to report on something they didn’t know about before they realized they needed more manpower to cover it. There were so many candidates and only three correspondents.

Luckily, the dozens of correspondents who have walked through The Daily Show’s doors over the years arrived to lend their support to Stewart and the “Best Fucking News Team” with their time-honored brand of mockery—but they directed pretty much all of it at Stewart.

The show launched many correspondents’ future careers, so they returned at the end to pay homage to the man who made it happen. Some highlights:

Before long we all had “Too Many Cooks” stuck in our heads as more people showed up—some live, some via prerecorded video. We lost track of some correspondents and didn’t recognize others, and soon the politicians who had felt Stewart’s wrath over his nearly 17 years of hosting appeared to thank him and say good riddance.

And the man we’d been hoping would show up ever since Stewart announced his retirement? Of course Stephen Colbert showed up, leaving his sleigh (and Alex Trebek) to lead Stewart, the Frodo to his Sam, to the “Undying Lands”—or as we know it, New Jersey. There’s simply no way Stewart could’ve been sent off without Colbert.

While their reunion mostly relied on some extended Lord of the Rings puns, Colbert went off script at the end to genuinely thank a visibly moved Stewart for everything he had done for Colbert and everyone else.

“Here’s the thing Jon, you said to me and many other people here years ago to never thank you because we owe you nothing,” Colbert said. “It is one of the few times I’ve known you to be dead wrong. We owe you—and not just what you did for our career by employing us to come on this tremendous show that you made—we owe you because we learned from you.”

After the break, Stewart homaged one of his favorite films, Goodfellas, with his own version of the Long Take, as he took fans on a tour of The Daily Show‘s offices and introduced them to his staff.

Stewart’s crew had a special procedure in place for when Trump announced his decision to run for president, which should surprise no one.

With the show winding down, Stewart started to get sentimental. The debates (and not being able to cover them) had made him realize what he would be missing, so he left us with one last uncensored monologue for the ages, a quintessential Jon Stewart farewell warning about bullshit and all the flavors in which it presented itself.

“The best defense against bullshit is vigilance,” Stewart said. “So if you smell something, say something.”

It was surely a monologue for the ages.

Stewart went out with his heart on his sleeve. After thanking Comedy Central, the cast and crew, and the audience who made it all possible, he gave us a pep talk. He had to say goodbye to the show, he said, but he wasn’t really saying goodbye. It was only a small part of his career—and the life of The Daily Show.

It was, he said, just a pause in the conversation.

It’s going to be difficult to try to fill the Jon Stewart-sized snark hole in our hearts. We’re going to miss the shit out of his daily takedowns and the nuance he brought to tackling the toughest subjects, some of which we didn’t think could provide any comedic fodder.

But even though Stewart will be gone from our TV’s, his influence is already all over TV and film, and his alumni will carry that torch in spirit. Noah in particular will demonstrate this when he starts his tenure next month as The Daily Show’s conversation picks back up.

Stewart tried to sneak out, but before he could go, he finally got his own Moment of Zen in the most Jersey way possible: with a performance from Bruce Springsteen and the E Street Band.

Now let’s go get that drink.