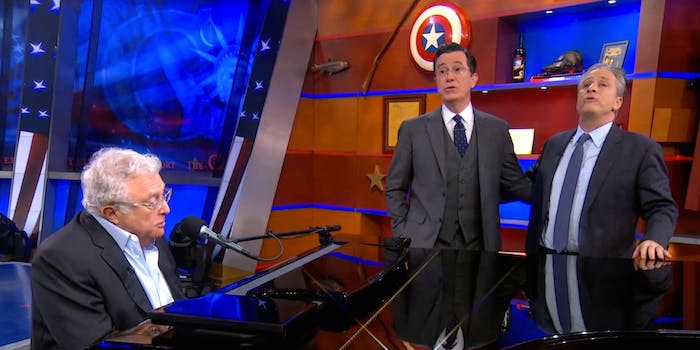 In the end, Stephen Colbert didn’t go out with a bang. He went out with something much bigger—along with some help from his friends.

Over the past month, Colbert didn’t try to disguise or ignore the fact that he was ending his show; in fact, he seemed to relish in announcing it. So when it came to his final episode on Thursday night, it was no surprise to the Colbert Nation—except maybe the people who have never turned into an episode of The Colbert Report before this.

Whether or not it does get rebooted, the Report had a lot to live for in its final episode alone. Although Colbert tried pretending it was just like every other show, he only got through one of his regular segments before devoting the rest of the episode to his fond farewell. And it only took about 10 minutes before things got delightfully weird.

Remember how Grimmy, Colbert’s Grim-Reaper-like friend, was supposed to be Colbert’s final guest? It led many people to worry that Colbert might kill his beloved alter-ego. But that would have been too easy. Colbert defies everything already, so why not death as well? In one gunshot, he pulled one over on his critics as well as the Nation. Looking back, how could he not live through everything?

Having taken care of that last loose thread, his job was done. So what was a political pundit to do? Alone at his desk, he began singing Vera Lynn’s “We’ll Meet Again,” before suddenly being joined by all of his friends.

Prior to this, it was a show lacking that sentimental touch—save for a nod to the viewers in his final Word segment—but it was still full of the wackiness we’ve come to expect and love. Suddenly, the show filled up with a plethora of A-list names.

But even then, Colbert was missing something, as were we: a conclusion. Luckily for him, as he stood on the roof of his building with only his Captain America shield, that conclusion came in the form of some old friends we weren’t expecting: Santa, Abraham Lincoln with a unicorn, and Jeopardy host Alex Trebek. Christmas is going to be really interesting this year.

Tucked in his sleigh, Colbert thanked everyone who worked on the show and the Colbert Nation. He couldn’t have done it without him.

After the show aired, Colbert sent a final tweet out to his viewers. Was it him, or his character? At this point, it’s both.

I changed the world!