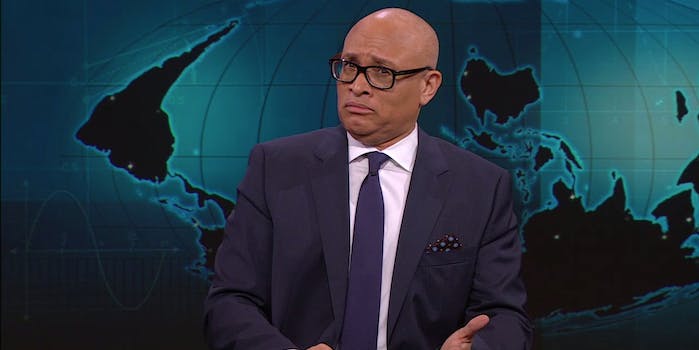 Comedy Central decides to not keep it 100.

On Monday, Comedy Central announced it had canceled The Nightly Show with Larry Wilmore, which follows The Daily Show and was meant to fill the empty Colbert Report slot. After just two seasons, the show is coming to an end this week.

The Daily Dot received this statement from Comedy Central:

Production on The Nightly Show with Larry Wilmore will cease after its August 18 episode. We thank Larry and The Nightly Show staff for their tireless efforts across the past two years and the conversations the show generated by addressing social issues of great importance to the country, always challenging people’s attitudes, perceptions, and bias.

As a Colbert replacement, Wilmore was of course going to have a tough time, as Trevor Noah has on The Daily Show. The show’s ratings never reached The Colbert Report‘s hallowed heights, which came from years of shaping a very specific audience, but then Colbert has faced a similar ratings slump in his new seat.

Wilmore mercifully avoided the “games” that fuel many other late-night shows; his only recurring gimmick was the “Keep It 100” segment, but even that was meant to provoke dialogue. He rarely got lumped in with the more political late-night hosts who “eviscerate” a topic or subject on a weekly basis. Wilmore was more subtly addressing race and class; he didn’t have to yell through his segments to make a point, and made sure to bring on diverse writers like Franchesca Ramsey.

Not every segment hit; a September interview with Bill Nye sent criticism and claims of anti-intellectualism Wilmore’s way during a Reddit AMA. He was also called out for a segment on Caitlyn Jenner‘s transition. In an interview, Comedy Central’s president Kent Alterman said the show “hasn’t resonated.”

I’m really grateful to Comedy Central, Jon Stewart, and our fans to have had this opportunity. But I’m also saddened and surprised we won’t be covering this crazy election or ‘The Unblackening’ as we’ve coined it. And keeping it 100, I guess I hadn’t counted on ‘The Unblackening’ happening to my time slot as well.

As news spread, people aired their opinions about this Unblackening:

Not even an abrupt firing can get Larry Wilmore's name trending on Twitter pic.twitter.com/qpOibrvfan

remember Larry dropped nukes during the White House Correspondents Dinner just this year. How you sidelining that? https://t.co/5T6GHAat6K

I wanted to say something about Larry Wilmore's show being cancelled, but I hardly ever watched it so I'm actually part of the problem.

Wilmore is expected to address the cancellation on tonight’s show.