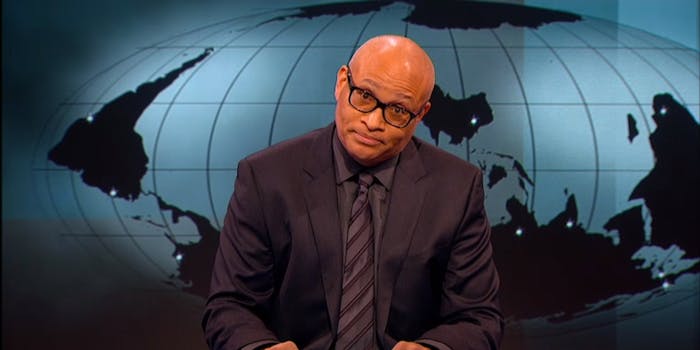 He had quite the tall order to fill on his first night hosting.

“We’re talking Selma, Ferguson, and Eric Garner,” Larry Wilmore said at the beginning of his first episode of The Nightly Show. “It’s Comedy Central’s worst nightmare: A brother finally gets a show on late-night TV!”

From his first moments on TV, Wilmore made it clear that he wasn’t going to do another Colbert Report, and that’s not necessarily a bad thing. So far, Wilmore and Stephen Colbert only share the timeslot and the studio they filmed in. While Colbert’s right-wing persona was wacky and outrageous, Wilmore promised his audience that he would “keep it 100 percent real” every night—he even had the stickers to prove it.

The former Senior Black Correspondent for The Daily Show has big shoes to fill, both in his timeslot and with his lead-in from Jon Stewart. As it’s only the first show, Wilmore and his staff will undoubtedly tweak plenty of things, but so far he and his show are fitting in nicely.

Wilmore’s textbook dry humor was back front and center as he riffed on current events during the first part of his show. As the show’s original title, The Minority Report, suggested, Wilmore isn’t afraid to focus on racial issues. Sitting at a long table instead of a desk, he was quick to point how not awesome everything was, particularly with that Lego Movie snub and reports as recently as Monday that Florida cops used black people’s mugshots for their target practice. Wilmore also wasn’t afraid to make fun of Al Sharpton or take multiple shots at Gandhi on Martin Luther King, Jr. Day.

At this point, his show diverged from the format of its predecessors (and Stewart before him). Following the first commercial break, Wilmore moderated a panel of guests to discuss a specific topic. He said he would regularly use the rest of his show after the first break to moderate panels about one or multiple topics.

Wilmore promised to feature voices that aren’t usually heard on other shows, and on his first show he talked about racism and recent protests with Nightly Show correspondent Shenaz Treasury, New Jersey senator Corey Booker, rapper Talib Kweli, and actor Bill Burr, who was in Black or White, a movie that dealt with race.

We’ve seen panels go awry on plenty of cable news shows before—they often become fodder for Stewart at that point—but Wilmore’s panel was positively civilized. They might not have come to a conclusion, and they had issues talking over each other, but the wide range of views was refreshing to see—and Wilmore, the panelists, and the viewers might have even learned something from it.

As the show grows and evolves, and Wilmore and his crew get more comfortable with the process, they’ll continue to keep it 100 percent real. With fans being able to ask Wilmore a question every night on set topics like Bill Cosby and his staff’s question about his last racist thought, things are bound to get uncomfortable—and that’s probably the way the show wants it.

Screengrab via The Nightly Show/Comedy Central