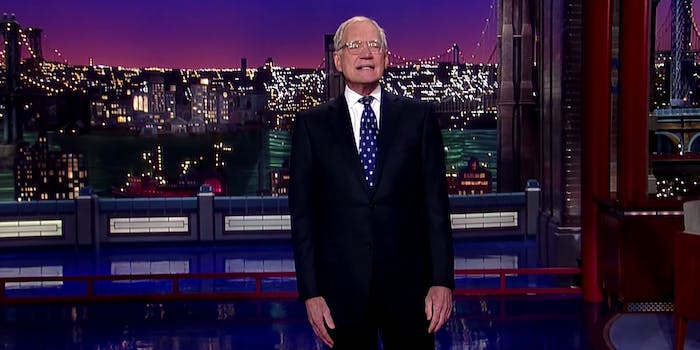 Letterman's goodbye to the 'Late Show' was nostalgic, touching, and guest-free.

After 33 years and more than 6,000 episodes, David Letterman said goodbye to television Wednesday night. The show opened with a history of U.S. presidents saying “our long, national nightmare is over,” before having recently shot footage of Obama saying the line, and Letterman step into the frame to ask if he was kidding.

It was largely a self-deprecating goodbye, with Letterman joking about how “it’s beginning to look like I’m not going to be getting yhe Tonight Show,” and claiming that one sign that he needed to retire was that his cue card guy, Todd, couldn’t possibly make the words on the cards any larger. Many of his opening jokes centered around the various ways in which people were relieved that he was finally going off the air.

Self-deprecation has always been a signature of Letterman’s, but such jokes wouldn’t work without the fact that he’s been adored by his fans for more than three decades—the lengthy standing ovation at the show’s open, accompanied by cheers of “Dave! Dave! Dave!” that probably went on for 30 minutes before being edited for television says everything about the loyalty and admiration of Letterman’s fans—and why he can so successfully get away with making fun of himself.

In the guest-free final episode, things were mostly an extended version of the usual opening-monologue and solo desk segments, with the show running short clips from old episodes, and such montages as Letterman’s famous interactions with children over the years, which was basically this awesomeness:

…and the famous bit in which he worked a Taco Bell drive-thru for a day:

The Top 10 list was appropriately star-studded for the finale, with famous friends of the show reading the top “Things I’ve Always Wanted to Say to Dave”:

The finale also included a long segment,”Slice of Life,” which gave viewers an idea of the daily on-goings at the Worldwide Pants offices. Basically: Each day is about as hectic and fun and you’d imagine.

Letterman signed off with an extended list of thank yous, including those to his staff, wife, and son, the band (each member thanked separately), and an especially sincere thanks to CBS President Leslie Moonves for his “patience” with him over the years (he said the word “patience” could be underlined 12 times in print, but we unfortunately lack the ability to do so), and the audience who’s loyalty kept him on television so damn long.

The show was closed with the Foo Fighters performing 1997’s “Everlong”—a band that once canceled a tour in South America because Letterman had asked if they could be his first musical guest when he returned to the show after undergoing open-heart surgery.

The end credits included photographs and names of each individual staff member. The show ran 17 minutes past its scheduled time.

Update 7:27am CT, May 21: This post has been updated with clips from the finale as they became available on YouTube.