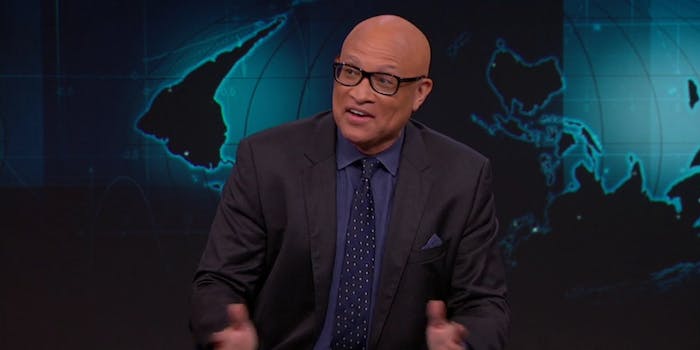 The decision, occurring just 12 weeks before the 2016 Presidential election, was a business one. Comedy Central thanked Nightly Show host Larry Wilmore and his “tireless” staff for their hard work and the conversations the show created, but Comedy Central president Kent Alterman noted that The Nightly Show “hasn’t resonated.” Other reports indicate that the decision to ax might’ve had something to do with contracts, and it felt that The Nightly Show’s ratings couldn’t justify renewing it.

“We just didn’t feel like we had enough traction to sign up for another year. It wasn’t about the election—it’s about another year of the show,” Alterman told the Hollywood Reporter. “Sadly, we’ve been hoping against hope that it would start to resonate in any of those quarters and we just weren’t seeing evidence of it. As much as we like Larry and the uniqueness of the show and the voices that are on the show—not just in terms of ratings—it hasn’t resonated in terms of our fans engaging with the show with consuming or sharing content or having a dialogue about it on social platforms.”

Wilmore, a former Daily Show correspondent who was tapped to fill the time slot Stephen Colbert left open after ending The Colbert Report, was certainly up against tough competition once The Nightly Show launched. He already had to go head-to-head with the first half of Jimmy Fallon’s Tonight Show, a ratings juggernaut for late-night as well as a viral machine; Jimmy Kimmel Live; the second half of Conan; and soon enough he was pitted against Colbert’s iteration of The Late Show. All of those shows except for Conan (which boasts the tenured brand recognition of Conan O’Brien) air on broadcast networks, which reach more screens and generally receive larger ratings than basic cable shows.

Wilmore didn’t mince words when he addressed his show’s cancellation at the end of the week.

“I’m really grateful to Comedy Central, Jon Stewart, and our fans to have had this opportunity,” Wilmore said in a statement. “But I’m also saddened and surprised we won’t be covering this crazy election or ‘The Unblackening’ as we’ve coined it. And keeping it 100, I guess I hadn’t counted on ‘The Unblackening’ happening to my time slot as well.”

It might not been that shocking to those paying attention to factors like ratings, but fans and those who saw the importance of having Wilmore’s unique voice challenging social issues, race, and bias in a mostly white late-night field were stunned at the sudden cancellation, as well as at the injustice that Wilmore wouldn’t be able to cover the rest of the election.

I wanted to say something about Larry Wilmore's show being cancelled, but I hardly ever watched it so I'm actually part of the problem.

Like Last Week Tonight, Full Frontal, and Late Night, The Nightly Show is not inherently viral. Those shows (two largely satire and one which has has become a political and traditional late-night hybrid) focus on meatier explainers and discussions, which will often not get as many views as “Carpool Karaoke” or “Lip Sync Battle.” But there’s a key difference between them: The Nightly Show does not have its own YouTube channel.

It might not have been enough to save its buzz and ratings: Wilmore still faced direct competition from recognizable names and longtime veterans and he faced an uphill battle to establish his own show after Colbert inhabited the space for nine years. But it’s 2016, many viewers are catching the highlights from late-night TV on YouTube the next day, not live on TV, and Wilmore’s clips have been limited to being posted on Comedy Central’s YouTube channel and curated into a playlist. (It’s far from the only show housed on Comedy Central’s YouTube channel; Inside Amy Schumer, @midnight, Workaholics, and Broad City also have content there.)

For years, fans had to go to Comedy Central’s website to watch Daily Show, Colbert Report, and Nightly Show clips and full episodes. Once it buffers, the quality is great and includes closed captioning (something YouTube struggles with) and aside from occasional autoplay, embeds didn’t cause problems running on sites that posted those videos. However, it’s harder to share directly than YouTube, which shows up as a watchable embed when shared across social media.

The Daily Show now has a YouTube channel, one started in May according to its YouTube page, and it includes clips from the start of Trevor Noah’s run last September. The Nightly Show never got one.

Comedy Central did not return a request for comment on why it never started a public Nightly Show YouTube channel.

Having that separate channel streamlines the process of getting content straight to the viewer without any hassle, and as John Oliver, Samantha Bee, and Seth Meyers have all proven, people will watch content that, conventionally speaking, shouldn’t or doesn’t go mega-viral because it’s compelling in spite of its fringe subjects and longer running time. (Oliver’s videos alone can sometimes be more than 20 minutes of straight information.)

For instance, both Meyers and Oliver did segments on the water crisis in Flint, Michigan, earlier this year that went viral for how they explained the crisis to people who weren’t aware of it and exposing the kind of corruption involved. Wilmore did segments, too—several of them. His most recent came last week, and he demonstrated that while people have largely stopped caring, Flint is still suffering.

The Nightly Show has social media, of course, though its Facebook and Twitter boasted far lower subscribers than most of its late-night counterparts.

As a late-night professor, Wilmore attacked racial and social issues and didn’t care if it made people uncomfortable, even if he misstepped a few times along the way. It’s what made the people who tuned in love him, and it’s what the rest of the country saw on display in Wilmore’s brilliant and polarizing White House Correspondents’ Dinner keynote. That sentiment could change in the years to come: Colbert and Meyers also did speeches that were seen as mean-spirited and polarizing, but now they’re often cited among people’s favorites or most effective.

Wilmore addressed his cancellation in the beginning of Monday’s episode of The Nightly Show. He thanked his staff and the fans, lamented not being able to finish out covering the 2016 election, and joked that “racism is solved, we did it.”

Wilmore told the audience: “Now, when we started the show, we wanted to have a conversation on some very tough subjects. … And we’ve had a lot of fun doing just that. Really, our show was at its best when the news was at its worst.”

Later in the episode, Wilmore moderated a debate between correspondents Mike Yard and Rory Albanese over the N-word, one which Wilmore used during his White House Correspondents’ Dinner speech amid debate and criticism. Like many of Wilmore’s segments, it was insightful, and it led Albanese to wish for “late-night comedy on the air that dealt with things like this.”

“That would be pretty effective, but that doesn’t exist, Rory,” Yard replied, keeping it 100—Wilmore’s promise to his audience. “Because apparently too much of that shit makes white people uncomfortable, just like the ‘N’ word.”