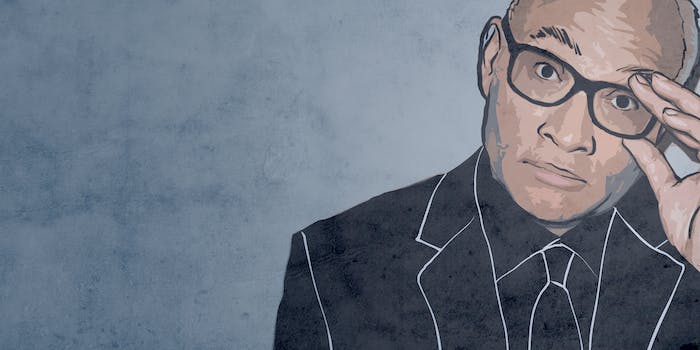 9 defining moments from ‘The Nightly Show With Larry Wilmore’

You probably missed them.

It’s hard to say that America will miss Larry Wilmore after Thursday night marks the comedian’s last as host of The Nightly Show.

Just keeping it 100: Most of us weren’t tuning in during the show’s nearly 20-month run in Late Night with Stephen Colbert‘s old slot on Comedy Central. It was our loss. Aside from Wilmore offering 50 percent of late night’s black voice, The Nightly Show stood out with its sharp social commentary and its frank and witty discussions of racism, sexism, and politics.

America missed out on the “The Unblackening,” Wilmore’s take on the shenanigans of the 2016 election cycle and “Keep it 100,” the show’s roundtable discussions of current events. At a time when police violence and the rise of Donald Trump riddled the airwaves, Larry Wilmore was often a reliable voice of both reason and outrage. It’s just that not enough of us were listening.

Or more accurately, not enough of us were tweeting. Comedy Central cancelled The Nightly Show not just because of its poor ratings but also due to its failure to resonate on social media.

“As much as we like Larry and the uniqueness of the show and the voices that are on the show—not just in terms of ratings—it hasn’t resonated in terms of our fans engaging with the show with consuming or sharing content or having a dialogue about it on social platforms,” said Comedy Central CEO Kent Alterman to the Hollywood Reporter.

In short, Wilmore’s nuanced takes on the Bill Cosby trials or the sexism rampant in Hillary Clinton‘s campaign didn’t go viral the same way the Roots performing a Game of Thrones recap rap on The Tonight Show with Jimmy Fallon did the next morning.

Wilmore even said as much himself.

“It’s not designed to have the type of things that [Jimmy] Fallon and [James] Corden do, like the [carpool] karaoke type of thing or lip sync battle and those types of things because those are such pure comic things,” Wilmore told THR earlier this year.

The Nightly Show‘s inability to go viral isn’t solely due to it going over the public—or at least most of Twitter’s—head. Wilmore’s show had a few boring stretches and failed jokes here and then. But there were many and increasingly regular moments when The Nightly Show hit the nail on the head in a way that no one else in late night could. In the age of YouTube and streaming, these moments can live on. (Though, as we noted, Comedy Central never gave The Nightly Show its own YouTube channel.)

We’ve gathered our favorite moments from The Nightly Show’s far-too-short run below.

Wilmore was blunt when George Zimmerman back in May announced his auction of the gun he used to kill Travyon Martin: “Who woke up this rotting piece of human excrement?” asked Wilmore. The late-night host vocalized what most of America was thinking about Zimmerman’s return to the news cycle.

Following Trump’s remarks that Second Amendment activists could “do something” about Clinton, Wilmore took the opportunity to skewer Trump spokeswoman Katrina Pierson‘s defense that Trump was joking. “Yep, that’s right, Donald Trump not-so-subtly hinting that gun rights activists should ‘do something’ about Hillary Clinton,” Wilmore said. “Really? You’re joking about your political opponent being whacked.”

3) Gang members on the Baltimore protests

One of the more unique Nightly Show segments was when Wilmore sat down with rival gang members at a Baltimore diner to discuss their new truce. The segment put Wilmore’s wry humor and top-notch interviewing skills on display. It was also a rare, human glance at a little-understood group.

Following the fatal shooting of Alton Sterling by police, Willmore pointed out that Sterling’s criminal record was beside the point.

“What really gets me is that whenever this happens, there’s always an immediate takedown of the dead man’s character,” Wilmore said. “So he had a criminal record. Martha Stewart has a criminal record. I don’t remember her being executed in a convenience store parking lot.”

What exactly went wrong with Jeb Bush‘s run to become the Republican nominee for president? A lot of things. From the unnecessary exclamation point following his name to his refusal to criticize brother and former president George W. Bush, Wilmore’s takedown of Bush hits it home.

It’s hard to get former presidential candidate Bernie Sanders in a light mood. Which is what makes Sander’s appearance as a guest on The Nightly Show so memorable. Not only did Sanders deliver a spoken world takedown of Ted Cruz, he performed an epic mic drop at the very end.

Donald Trump once threatened to sue rapper Mac Miller after his song “Donald Trump” went platinum. Miller, however, got the last word by “whitesplaining” to Trump on The Nightly Show that he was running a racist campaign.

Willmore nailed the last coffin on the career of America’s former dad in his coverage of Bill Cosby‘s trial for sexual assault. After the comedian was arrested earlier this year, Wilmore took the opportunity to savor the moment. “Yes, we didn’t forget about you, motherfucker, and now neither did the justice system,” said Wilmore.

Bill O’Reilly decided to hold a debate on racism on The O’Reilly Factor. Unfortunately the Fox News host forgot to invite any black people. The ever-helpful Wilmore inserted himself into the show.