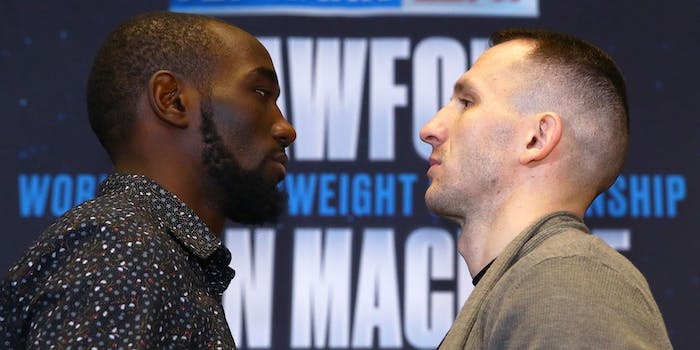 One of the best fighters in the world steps back into the ring.

If you’ve noticed that Terence Crawford hasn’t fought an opponent with a real chance to beat him since he was a 140-pound junior welterweight 26 months ago, you’re not alone. Thanks to boxing politics, Crawford has been forced into fighting more B- and C-level competition since he moved to the 147-pound welterweight division. That won’t necessarily change on Saturday when Crawford defends his title vs. Egidijus ‘Mean Machine’ Kavaliauskas in a fight you can live stream on ESPN.

And quite honestly, there’s not a reason to be hopeful for Crawford’s career in the near future. But Crawford can’t allow himself to think about it when he faces Kavaliauskas. He has to continue winning and continue winning impressively. And he’s ready for that.

“I’m not focused on no other opponent besides the opponent that’s in front of me,” Crawford said at a press conference this week. “My goal is to make sure I get the victory come this weekend, and that’s the only person I’m focused on now. Anyone else is talk. It goes in one ear and out the other. He’s young, hungry, and I’m not taking him lightly.”

Here’s everything you need to know to live stream Crawford vs. Kavaliasukas.

How to watch Crawford vs. Kavaliauskas

Crawford vs. Kavaliauskas will be the main event on the ESPN card that begins at 8pm ET, and the undercard should be excellent with Richard Commey vs. Teofimo Lopez and Michael Conlan vs. Vladimir Nikitin. The entire undercard will be streamed on the ESPN+ streaming service beginning at 5:45pm ET (the fight card is listed below). Most of the major live streaming services offer ESPN, and all of the ones featured below include a free one-week trial. Meanwhile, here’s how to watch ESPN+ and what the streaming service has to offer.

This service is great for those who want to watch the service’s massive on-demand library of movies, TV shows, and original series but who also want to stream live TV on a platform with nearly 60 channels. Thanks to that kind of versatility, Hulu with Live TV is a nice option for cord-cutters. It’s also the best way to bundle your streaming services into one place. (Here’s the complete list of Hulu Live TV channels.)

The cheapest way to watch ESPN online (and to keep watching fighters like Crawford, Lopez, and Commey) is through Sling TV. The Sling Orange package is only $25 per month and it includes ESPN, ESPN2, and ESPN3, along with a bunch of other great channels. If you really enjoy sports, you might want to upgrade to Sling Orange + Blue (see photo above), for $40 per month. Sling TV is currently offering a deal where you can subscribe for 40% off the regular price for the first month of your subscription. (Here’s a complete guide to Sling TV channels and our Sling TV review.)

YouTube TV allows you to add up to six accounts for every subscription, and all of them come with free cloud DVR. Plus, considering YouTube puts all of your favorite channels in one place, it’s fantastic for convenience. Also, if you’re a sports fan, specialty options like NBA TV and MLB Network are certainly worth considering.

To watch the entire Crawford vs. Kavaliauskas undercard on Saturday, you’ll need to subscribe to ESPN+. But remember, the main event and the co-featured bouts are exclusive to the ESPN network. The channel’s subscription service costs $4.99 per month, and it functions as an extension of ESPN’s main app and website, unlocking all sorts of exclusive live sports and original series. That includes plenty of UFC action and the entire 30 for 30 series. The undercard bouts start on ESPN+ at 5:45pm ET.

Crawford vs. Kavaliauskas: Why it matters

Against many other opponents, Kavaliauskas (21-0-1, 17 knockouts) would be a real threat. He’s a two-time Lithuanian Olympian, and he’s defeated decent fighters like David Avenesyan and Juan Carlos Abreu in his pro career. He’s got a powerful punch, and he’s on his way to a solid career.

But against Crawford (35-0, 26 KOs), he doesn’t have much of a chance. He’s a 10/1 underdog, because Crawford is one of the best three fighters in the world (some even think he’s No. 1 overall). Kavaliauskas is a good fighter, but Crawford has faced plenty of good fighters. He usually destroys “good” fighters.

“Terence is worth the price of admission by himself,” his promoter Bob Arum said. “He is pound-for-pound the best fighter in the world, and everybody will have an opportunity to watch him fight a very tough Lithuanian in Kavaliauskas, who has fought for us for many years and is a tough, tough Eastern European fighter.”

Crawford is a bit stagnated at the moment. He’s promoted by Top Rank, but virtually every other top 147-pounder is affiliated with Premier Boxing Champions. Since Top Rank and PBC almost never work together to match their fighters for bouts, Crawford hasn’t had the opportunity to fight the likes of Errol Spence, Shawn Porter, Danny Garcia, Manny Pacquiao, or Keith Thurman. It must be a disappointing experience for him. It certainly is for fans of the sport.

“It’s frustrating but I look at it as a business move by them not to fight me,” Crawford told the Los Angeles Times. “I’m not going to knock them or be a hater, but I know where I stand and I know the game they’re playing and there’s nothing I can do about it. I just have to focus on what I can do and keep making a living and keeping my name up there as the best pound-for-pound fighter.”

Kavaliauskas will do his best to upend whatever plans Crawford might have.

“We started [training] in June, but we started light,” he said. “Still, all the tactics, everything was about how Crawford fights, which stance [he’ll use]. Sparring, we had lots of different guys, southpaw, orthodox, guys in different stances. And the training camp, [we worked on] speed, power, sparring, technique and tactics, all in this five, six months.

“Going straight ahead to Crawford is not an option because he’s too smart and he showed in his last fight that he’s smart in the ring. So, yeah, we’ll work on my combinations.”

Crawford will try to make sure those combinations don’t do a thing against him—and don’t mess up his future career.