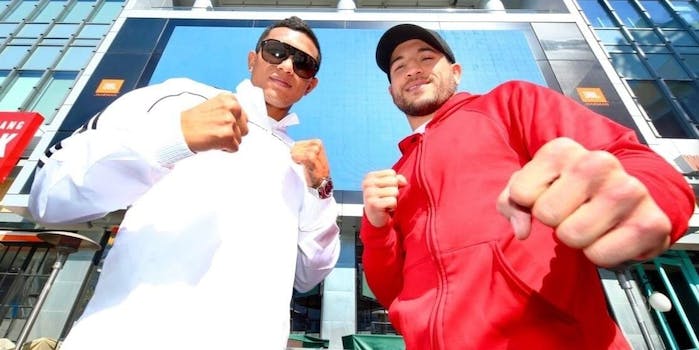 How to live stream Miguel Berchelt vs. Jason Sosa

Watch one of the most exciting fighters in the sport.

Compared to the other top fighters in the 130-pound junior lightweight division, it seems like Miguel Berchelt doesn’t garner as much of the boxing world’s praise. Gervonta Davis gets more of the hype. Andrew Cancio, with his 9-to-5 blue-collar job, gets more of the respect. Jamel Herring, with his Marines background, gets more of the love.

But in all honesty, Berchelt—who will face Jason Sosa on Saturday night in a fight you can live stream on ESPN—might be better than any of them. He’s a powerful, aggressive puncher who hardly ever makes for a dull fight. Yes, he’s a big betting favorite against Sosa. And yes, Canelo Alvarez vs. Sergey Kovalev on DAZN, far out-shines the ESPN telecast with Berchelt. But you should still carve out some time this weekend to watch Berchelt do his work.

Here’s everything you need to know to watch Berchelt vs. Sosa.

How to watch Berchelt vs. Sosa

Berchelt vs. Sosa will be the main event on the ESPN card that begins at 10:30pm ET, and Javier Molina vs. Hiroki Okada will serve as the co-featured bout. The entire undercard will be streamed on the ESPN+ streaming service beginning at 7pm ET (the fight card is listed below). Most of the major live streaming services offer ESPN, and all of the ones featured below include a free one-week trial. Meanwhile, here’s how to watch ESPN+ and what the streaming service has to offer.

This service is great for those who want to watch a massive on-demand library of movies, TV shows, and original series but who also want to stream live TV on a platform with nearly 60 channels. Thanks to that kind of versatility, Hulu with Live TV is a nice option for cord-cutters. It’s also the best way to bundle your streaming services into one place. (Here’s the complete list of Hulu Live TV channels.)

The cheapest way to watch ESPN online (and to keep watching fighters like Berchelt and Sosa) is through Sling TV. The Sling Orange package is only $25 per month and it includes ESPN, ESPN2, and ESPN3, along with a bunch of other great channels. If you really enjoy sports, you might want to upgrade to Sling Orange + Blue (see photo above), for $40 per month. Sling TV is also currently offering a deal where you can subscribe for 40% off the regular price for the first month of your subscription. (Here’s a complete guide to Sling TV channels and our Sling TV review.)

YouTube TV lets you add up to six accounts for every subscription, and all of them come with free cloud DVR (which might be good because fans probably will want to watch Alvarez vs. Kovalev live). Plus, considering YouTube puts all of your favorite channels in one place, it’s fantastic for convenience. Also, if you’re a sports fan, specialty options like NBA TV and MLB Network are certainly worth considering.

To watch the entire Berchelt vs. Sosa undercard on Saturday, you’ll need to subscribe to ESPN+. Remember, though, that the main event and the co-featured bouts are exclusive to the ESPN network. The channel’s subscription service costs $4.99 per month, and it functions as an extension of ESPN’s main app and website, unlocking all sorts of exclusive live sports and original series. That includes plenty of UFC action and the entire 30 for 30 series. The undercard bouts start on ESPN+ at 7pm ET.

Berchelt vs. Sosa: Why it matters

Berchelt made his biggest mark on boxing in 2017, when he engaged in a thrilling fight vs. the undefeated Francisco Vargas and then stopped him in the 11th round to take Vargas’ junior lightweight title.

Berchelt (36-1, 32 knockouts) hasn’t relinquished it since, beating tough opponents like Takashi Muiri and Jonathan Victor Barros and then dispatching Vargas again in their rematch last May. In reality, Sosa could be seen as a slightly softer touch for Berchelt.

Sosa is 23-3-4 with 16 KOs, and he’s won three straight fights. But those victories came against unimpressive competition, and when he’s faced more elite fighters lately, he’s fallen in defeat. He got stopped by Vasiliy Lomachenko, the best fighter in the world, in 2017, and in his next appearance, he lost by close decision to Yuriorkis Gamboa.

Sosa has some nice victories on his resume—he beat the then-undefeated Javier Fortuna and Stephen Smith in 2016—but there’s a good reason he’s about an 11/1 underdog vs. Vargas. Not that he seems to mind.

“This fight can’t help but be a classic,” Sosa, a former 130-pound titlist, said in a statement. “I want the fans to tune in because this is boxing at its best. Berchelt and I are pure fighters, and when you have two fighters like that in the ring, special things happen.

“You can’t help but respect a man like Berchelt who has defended his title five times. Once the bell rings, though, we will go to war.”

Berchelt and Sosa have also played up the Mexico vs. Puerto Rico rivalry angle, which has long made for outstanding fights in the sport’s history. Berchelt said this contest won’t be any different.

“We are two fighters who always bring excitement to the ring,” Berchelt said. “There are many great fights for me in the future, but I know I need 100% focus to beat a great former world champion like Sosa. The fans who watch this fight will be the winners. When you have two warriors in the ring, great things happen.”